Over the past several months, there have been a few rumors of Apple increasing storage capacities for the iPhone 6, perhaps doing away the 16 GB option at the low end and introducing a 128 GB model at the high end, at least for one of the two rumored models.

A set of schematics leaked in pieces over the past week and a half has included reference to various 16, 64, and 128 GB flash storage modules from several vendors for the iPhone 6, although it is unclear why there is no 32 GB option included on that list. 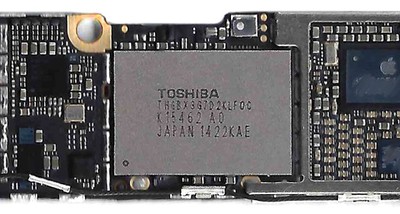 A new set of photos from Feld & Volk [Instagram page] and Sonny Dickson today that revealed the NFC chip present on the logic board of the 4.7-inch iPhone 6 also offers a good look at the flash storage module on this board. Based on the Toshiba part number, as seen on similar modules, the "7" indicates that this is a 16 GB module, suggesting the low-end iPhone 6 will continue to offer that amount of storage.

There are a few caveats, however, such as the possibility of this being a prototype or testing board using a 16 GB module not intended as a production option. Also, being a board for the 4.7-inch model, it is not yet known whether the rumored larger 5.5-inch iPhone 6 model will offer the same capacity options as the smaller model.

Rog210
16GB is a pathetically small amount of storage these days. How much would it cost Apple to double that amount?

It's just laughable at this point.
Score: 19 Votes (Like | Disagree)

taptic
What's up with you Apple?! It's annoying enough not to be able to pop an SD card in, but 32gb ought to be the base model!
Score: 17 Votes (Like | Disagree)

No way Apple will ship a fancy new phone with a paltry 16.

cfedu
16, 64, and 128 make perfect sense. Apple will have way more profits this way as most people will be willing to pay the extra 100$ for an extra 48 GB of storage.

If the base model was 32 Gb I would not pay more money for more storage. With 16 GB being the base, this is like a 100$ price increase for the iphone.
Score: 13 Votes (Like | Disagree)
Read All Comments