French Apple website IGen.fr (Google Translate) has shared a variety of new details about Apple's upcoming iPhone 6, including dimensions for each model, info about the protruding camera ring on the rear of both devices, and more. The photos appear to be of internal information residing in a Foxconn factory, as the 5.5-inch iPhone 6 and 4.7-inch iPhone 6 carry code names of N56 and N61, respectively. 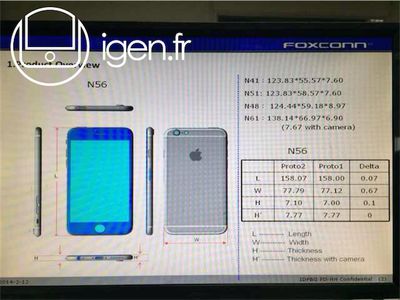 A comparison of both the 5.5-inch and 4.7-inch model, as well as the iPhone 5s
A source close to the production of the 5.5-inch version claims that it will feature a battery with a large capacity, possibly 2915 mAh. That number comes from a in line with a component leak spotted earlier this month. The source did not specify whether the larger device was equipped with a sapphire display, however Apple reportedly shipped 28 containers of displays to Foxconn from the United States. It is possible that those containers could have come from GT Advanced Technologies, which Apple partnered with to produce sapphire displays at a factory in Arizona. However, no additional evidence suggests that is the case.

Finally, the source notes that the iPhone 6 features a well cut-out logo on its rear, which is said to be made from a very durable material and lines up with previous leaks. The device's rear bands sighted in previous leaks are also said to be featured on the iPhone 6, and will act as refined antennas. Apple was also said to be working to feature a 2.5mm headphone jack on the iPhone 6, however the company scrapped it to avoid complaints about compatibility issues with existing audio accessories.

Certification tests for both models were said to take place last week, with mass production reportedly beginning this week. Apple is said to have ordered 40 million 4.7-inch units of the iPhone 6 for the rest of 2014, and is aiming for a 100 million devices by the end of this year. It was also stated that the launch 5.5-inch version may be delayed until a later time, although both are scheduled to be introduced at the same time.

Apple will reveal the iPhone 6 at a media event on Tuesday, September 9. In addition to a refined design as mentioned above, both models of the device will feature a faster A8 processor, an improved camera, and more.


Comparing reasons to call upon a higher power throughout the ages:

Diatribe
The only rational explanation is that aliens have abducted Jony Ive and this is the result of a not yet perfected cloning mechanism. :eek:
Score: 21 Votes (Like | Disagree)

I guess there white bands are here to stay


Ahahaah it's funny because so many people said it would be impossible, all fake, all coming from goophone and it's there to stay. Face it, this is the iPhone 6