Last month, a photo surfaced showing what looked very much in line with Apple's usual iPhone battery design but with a capacity of 1,810 mAh, higher than the 1,560 mAh battery found in the iPhone 5s. Speculation naturally pointed toward the new battery being for the 4.7-inch iPhone 6, with a number of observers being disappointed in the modest capacity increase considering the larger display slated for the device.

Just last week, an analyst report claimed the 4.7-inch iPhone 6 will actually include a 2,100 mAh battery, giving hope to those looking for a more substantial increase but lacking any evidence to support the claim.

New photos shared by Nowhereelse.fr [Google Translate] now provide additional support for the original 1,810 mAh claim. The photos offer a good look at the batteries, which appear to contain the full set of regulatory and specification text as well as an Apple logo, with one photo showing the batteries in trays for shipment. 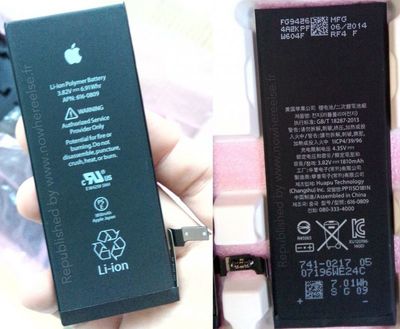 These new photos of the rumored 4.7-inch iPhone 6 battery come just after other photos surfaced from a different source allegedly showing the battery for the 5.5-inch iPhone 6. That battery checks in with a capacity of 2,915 mAh, potentially offering a significant increase in battery life depending on how much more power the device draws than its smaller sibling.

tascon
iPhone 6 NEEDS to have all day battery. I am tired of charging the iPhone 5s during the day.
Score: 38 Votes (Like | Disagree)

Compared to the iPhone 5S, the 6 will have:

I think battery life could actually be increased over the 5S substantially.
Score: 18 Votes (Like | Disagree)

It would make the iPhone 6 a brick.


I think it's time you worked out
Score: 16 Votes (Like | Disagree)

How on earth are you ending up needing to charge it during the day? If you start the day at 100% you need to use it insanely much, or with some really power hungry or really poor optimised apps with very high brightness on the screen for it not lasting through the day?

I for one charge it overnight, and then I will mostly end up having 30-60% when I end up going to bed depending on my usage and whether I had to use it in bright light so the display had to run at 100% brightness for a long period of time. I have yet to be able to go from 100% to under 10% no matter how much I use the phone during the day.

How on earth could people have usage needs and usage patterns dissimilar to yours?!

The battery in my 5 is garbage. I've had to have it replaced twice already, and it's starting to shut off at about 15% again now. Do I use my phone a lot? Yes, because that's what the device is designed for. To be used.
Score: 14 Votes (Like | Disagree)

techspin
I'm ok with this. My 5s seems to be the exception to the rule as it lasts all day on a single charge with no problem. Even with heavy use the battery percentage does not dip below 40% by the end of the day.
Score: 12 Votes (Like | Disagree)
Read All Comments

Thursday September 22, 2022 1:04 pm PDT by Juli Clover
Apple today released iOS 16.0.2, addressing a number of bugs that iPhone 14 owners have been experiencing since the new devices launched. iOS 16.0.2 comes two weeks after the launch of iOS 16, and it follows iOS 16.0.1, an update made available to iPhone 14 owners on launch day. The update is available for all iPhones that are capable of running iOS 16. The iOS 16.0.2 update can be...
Read Full Article • 287 comments