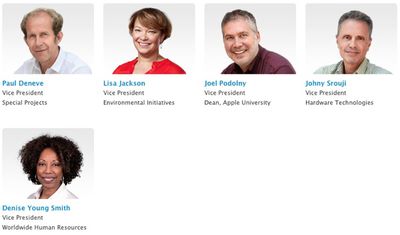 Since taking over as CEO, Tim Cook has aimed to share the spotlight with his employees, letting company leaders like Eddy Cue, Craig Federighi, and Jony Ive take part in press interviews and lead Apple events. The addition of five new VPs to the press roster suggests Cook and the team at Apple are more open than ever, recognizing the efforts of an even larger number of key employees.

Of the new executives joining the page, Paul Deneve and Lisa Jackson are relatively new hires, joining Apple in 2013. Deneve oversees special projects, while Jackson has a public-facing job overseeing Apple's environmental efforts. Joel Podolny, dean of Apple University and Denise Young Smith, who oversees Apple's human resources, were promoted to their roles early in 2014. The remaining VP, Johny Srouji, oversees hardware technologies, a role he has held for just over a year.

The new additions to the executive press page also spotlight two additional women who hold important leadership roles at Apple, bringing the total number of females on the page to three, with Angela Ahrendts. Apple has faced criticism for its lack of female leadership in the past, which Cook has been aiming to remedy. According to diversity numbers released earlier this week, 72 percent of Apple employees in leadership roles are male.

How? Diversity is a crock of _ _ _ _ that was made up to make people feel bad.... You hire the people who are qualified and who are right for the job. This Diversity crap is what's wrong with todays USA. If the person is white, black, yellow, green, blue... You hiring the one who is qualified. You don't hiring the black one because you need more diversity. Same goes for sex.
Score: 35 Votes (Like | Disagree)


It is 100% not always a good thing. Diversity for the sake of numbers is actually a horrible thing, why not hire the best person no matter their race, sex or sexual orientation?
Score: 32 Votes (Like | Disagree)

tomtendo
Every time I see an article like this is makes me shake my head. I think MR posted something about this earlier in the week about Tim Cook being unhappy about lack of "color" in the Apple Stores. When in reality, white males are the majority of people who are not only going to apply for the job, but, qualify for the job. It's just how it is. I'm sorry but most black men do no focus on technology like white males do. Just like how Sports Stores who sell athletic shoes are more likely to have Black men than White men(or women). Is just how things are. Why is the NHL like 90+% white? Because HOCKEY is predominately a white sport that attracts white youth. Basketball attracts inner city black children and because of that the NBA is 85% black.

It's just how things are. There is nothing wrong with that. What's wrong is thinking it is wrong and coming up with these diversity problems. I'm sorry, but I just find it absolutely dumb.
Score: 19 Votes (Like | Disagree)

How? Diversity is a crock of _ _ _ _ that was made up to make people feel bad.... You hire the people who are qualified and who are right for the job. This Diversity crap is what's wrong with todays USA. If the person is white, black, yellow, green, blue... You hiring the one who is qualified. You don't hiring the black one because you need more diversity. Same goes for sex.


Wrong. There are many qualified people that are overlooked because they aren't white and male.

It's more than qualifications. There is inherent bigotry everywhere.

White people are generally comfortable hiring more white males than minorities because they prefer their own kind.

That "preference" is unfair in the workforce that is real.

So get off your high horse
Score: 17 Votes (Like | Disagree)

Done more for showing diversity than anything else... :D

Couldn't be about recognizing her contribution?
Score: 12 Votes (Like | Disagree)

Friday December 2, 2022 10:54 am PST by Juli Clover
Google is continuing on with its attempt to convince Apple to adopt the RCS messaging standard, publishing a new "it's time for RCS" blog post. Promoted heavily by Google, RCS or Rich Communication Services is a messaging standard that is designed to replace the current SMS messaging standard. It provides support for higher resolution photos and videos, audio messages, and bigger file sizes, ...
Read Full Article • 543 comments