Intel today released new details on its next-generation 14-nanometer Broadwell processors, which are designed to combine high-performance and low power to allow for more efficient devices. Haswell ushered in an era of impressively long battery life, which is expected to improve even further with Broadwell.

In a list of features on the new chips, Intel says Broadwell will usher in "new form factors" with systems that are thinner and run both silently and cool, with two times reduction in thermal design point. 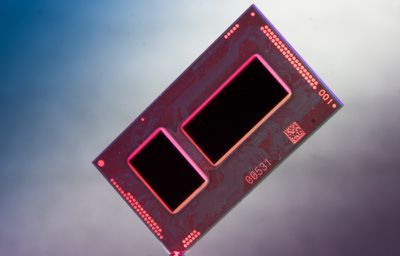 - The combination of the new microarchitecture and manufacturing process will usher in a wave of innovation in new form factors, experiences and systems that are thinner and run silent and cool.

- Intel architects and chip designers have achieved greater than two times reduction in the thermal design point when compared to a previous generation of processor while providing similar performance and improved battery life.

- The new microarchitecture was optimized to take advantage of the new capabilities of the 14nm manufacturing process.

- Intel's 14nm technology will be used to manufacture a wide range of high-performance to low-power products including servers, personal computing devices and Internet of Things.

As has been previously announced, the 14-nanometer Broadwell-Y Core M chip will be the first of the Broadwell processors to hit the market, with retailers releasing Core M devices in the fall. Designed specifically for low power devices such as two-in-one tablet/computer hybrids, the Core M's low wattage allows for fanless operation and its smaller physical size means it can fit comfortably in devices that are "razor-thin."

AnandTech has released a detailed look at the Broadwell architecture with a preview of Core M, pointing towards "substantial" GPU increases for the Broadwell line of chips and limited CPU performance improvements.

Apple is said to be working on a 12-inch Retina MacBook that has a slimmer form factor than the existing MacBook Air and a fanless design that aligns with some of the properties of the Core M Broadwell chip, but existing MacBook Air computers utilize the Haswell-U series chips that run at 15 watts while the Core M operates at approximately 5 watts, making it unclear whether it would be possible for a Retina MacBook to be powered by the Core M chip.

Intel's Core M processors are expected to ship during the 2014 holiday season, with additional Broadwell chips becoming available in early and mid-2015. The first devices utilizing Core M processors will be shipping before the end of the year.

taptic
Please... give us a real MacBook Pro update.
Score: 14 Votes (Like | Disagree)

i would not be surprised if apple gets the convertible two-in-one form factor down before the competition, assuming component parts reach the appropriate power envelope and dimension. the picture in the anandtech piece with the Broadwell-Y package next to earlier ones is pretty impressive. a 10" iPad retina/macbook air with a new thunderbolt monitor/dock would be pretty epic.


Perhaps the best way to approach a convertible two-in-one form is to not do it. If so, Apple already has it right.
Score: 9 Votes (Like | Disagree)

Let me get rid of that flash for you....
Score: 6 Votes (Like | Disagree)
Read All Comments