Several years ago, Apple rolled out a new page on its site touting job growth associated with its businesses in the United States, calculating that included over 300,000 workers directly tied to the company and its business partners, as well as over 200,000 more workers that were part of the App Store economy. The total number is now approaching 600,000 workers, driven largely by increases in the App Store segment over the past two years. 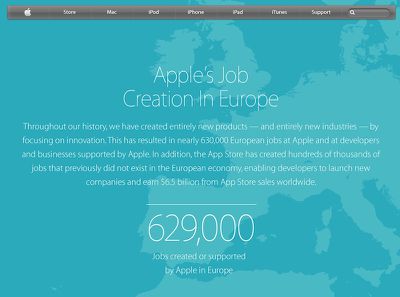 Now, Apple is bringing the same public relations effort to Europe, with a series of pages touting Apple's job creation numbers in Europe, as noted by The Wall Street Journal.

Throughout our history, we have created entirely new products - and entirely new industries - by focusing on innovation. This has resulted in nearly 630,000 European jobs at Apple and at developers and businesses supported by Apple. In addition, the App Store has created hundreds of thousands of jobs that previously did not exist in the European economy, enabling developers to launch new companies and earn $6.5 billion from App Store sales worldwide.

Out of the 630,000 European jobs cited by Apple, the company includes nearly 500,000 related to the App Store economy, with Apple highlighting the $6.5 billion in developer payments the represents over 30 percent of the total $20 billion paid out by Apple worldwide. The remaining 132,000 European jobs cited by Apple are related to the company itself, including its own employees and those at suppliers and resellers.

Country-specific versions of the pages, such as for France and Italy, share largely the same information, although each has a unique "Spotlight on Developers" section sharing quotes from and links to select developers from those countries.

Apple also puts a special spotlight on its European headquarters in Cork, Ireland, where the company now employs 4,000 workers. Apple notes that it is the city's largest private employer, housing roughly 10% of Apple's corporate employees and supporting an additional 2,500 jobs at other companies providing services to Apple in Cork.

And of those 500k so-called "jobs", how many are making enough from it to really call it a job and do nothing else? I'm guessing an extremely high percentage of those 500k people probably make under a hundred euros per month from it and need to have another/a "real" job.
Score: 23 Votes (Like | Disagree)

And of those 500k so-called "jobs", how many are making enough from it to really call it a job and do nothing else? I'm guessing an extremely high percentage of those 500k people probably make under a hundred euros per month from it and need to have another/a "real" job.


You know what kind of people are the worst? The ones who ask for spare change, and when you give them the change in your pocket, they complain that there's not more of it.
Score: 19 Votes (Like | Disagree)

Many US politicians like to offset blame onto Ireland due to failed US economic policy, US companies in Ireland employ real people in the thousands to serve the EMEA markets.


They are in Ireland because of lowest corporate taxes in the EU... and hopefully this will soon come to an end.
Score: 8 Votes (Like | Disagree)

Whatever it takes to pull-the-wool to get the billions "home", I guess.
Score: 8 Votes (Like | Disagree)

surfingarbo
Samsung should copy this.
Score: 8 Votes (Like | Disagree)

So every registered developer is considered a job created or supported by Apple? That's misleading. Some may just do it for fun, and majority of them have other day jobs.
Score: 7 Votes (Like | Disagree)
Read All Comments