Apple Touts U.S. Job Creation with Claims of 514,000 Jobs Tied to its Products

Apple has come under increasing scrutiny for its offshoring of product manufacturing in recent years, with a number of observers believing that Apple should be trying to bring more jobs to the United States. But as noted by AllThingsD, Apple has now taken a more public position on its domestic impact by posting a new page on its site highlighting over 500,000 U.S. jobs it claims to be directly or indirectly responsible for. 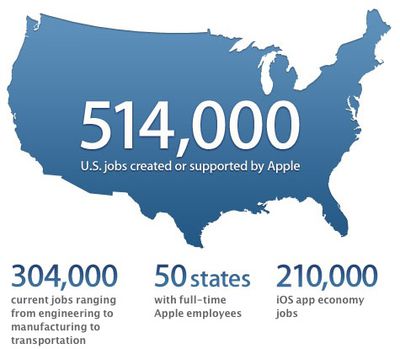 Apple breaks the 514,000 jobs down into two categories: 304,000 jobs directly tied to Apple and its business partners and another 210,000 jobs that are part of the "iOS app economy". The first category includes 47,000 Apple employees and another estimated 257,000 employees at companies such as Samsung, Corning, FedEx, and UPS who are part of Apple's supply chain and other businesses. Rather than a direct count of employees at other companies, that latter figure is calculated based on "employment multipliers" published the U.S. government and applied to Apple's domestic expenditures.

On the App Economy side, Apple notes that it has paid out over $4 billion to developers since the App Store was launched less than four years ago, creating an entirely new industry that has seen 210,000 new jobs added to the U.S. economy. With 248,000 registered iOS developers in the U.S. and over 5,000 iOS developer jobs listed on Indeed.com, Apple clearly believes that the industry will continue to see strong growth.

ArtOfWarfare
Am I being counted as one of the 210K people in app development?

Because I consider myself unemployed right now and am looking for a job. iOS is a fun hobby that happens to bring in about $10/day; it's no where near enough to sustain me.
Score: 17 Votes (Like | Disagree)

I wonder what those numbers would look like if Apple's manufacturing was done in the US as well. Not flaming them for being offshore. Just curious what the impact would be.

The numbers would be much closer to zero, if the resulting higher prices made their sales tank and prevented their products from getting any traction in an electronics market dominated by their low-cost Asia-sourced competitors :(
Score: 16 Votes (Like | Disagree)

Actually you're mostly wrong. Apple could absorb the hit on their profit margins and still make a profit. It'd make the items apple produce cost 33% more.

But you're probably the type that gloats that Apple has $100B in the bank. This is why.


$100B in the bank means $100B more that banks can loan out to people starting businesses, buying houses and cars, and other things, which all means more job growth and more tax income for the government. Do you think banks give out interest because of magic? Banks are profit-making enterprises, using your money to make more money, then they give you back a cut.

Don't argue about economics if you are so ignorant of the basic elements of an economic system.
Score: 14 Votes (Like | Disagree)

newagemac
Apple is one of the few U.S. companies that have been actually adding stores and adding jobs since the 2008 recession hit. Most have been closing stores and furiously laying off people up until recently. Props to Apple on that.
Score: 13 Votes (Like | Disagree)

I think it's kind of strange that Apple needs to brag about these things, but I guess they've been pushed into a corner so they kind of had to say something.


It is strange, but not incredibly surprising given the rhetoric of some individuals in these forums and in the press. If you listened solely to them, you would think that Apple only employed slaves and benefitted this country in no way. This information helps to put much of the recent discussion involving Apple into perspective.
Score: 13 Votes (Like | Disagree)

I wonder what those numbers would look like if Apple's manufacturing was done in the US as well. Not flaming them for being offshore. Just curious what the impact would be.

Edit: Geez...relax with the down votes people. It was a rhetorical question. Again...I'm not blaming Apple for having overseas operations. :rolleyes:


I down vote you for caring about down votes. ;)
Score: 12 Votes (Like | Disagree)
Read All Comments