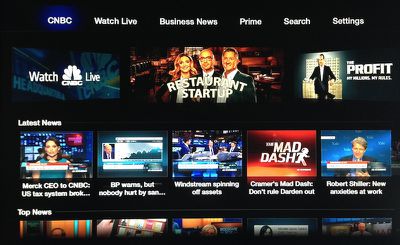 CNBC offers access to a live stream of the financial channel, as well as on-demand clips from news segments and full episodes of the channels "Prime" content original series. Viewing requires authentication with one of a number of cable and Internet providers. Notable cable companies not available for authentication include Time Warner and Charter.

FOX NOW includes on-demand access to a number of shows from the network, including 24: Live Another Day, Cosmos: A Spacetime Odyssey, Glee, and more. Authentication through a cable provider is required for full access to content.

Update 8:48 AM: As noted by The Loop, Brazilian sports subscription channel Esporte Interativo has also been added in that country.

JonneyGee
The deal breaker is the last line of the article. Hopefully they'll break free from cable soon and offer the channels a la carte! As soon as they do, so long cable subscription!!
Score: 20 Votes (Like | Disagree)

cyberlocke
Kick Cable to the Curb!

Until they break from the cable stranglehold, this is moot. Oh well, keeps me from watching mindless crap anyway. Much better ways to spend my time.
Score: 14 Votes (Like | Disagree)

Apart from the fact I live in Europe and my Apple TV only has one channel that works, Netflix.
Score: 13 Votes (Like | Disagree)

HobeSoundDarryl
Wow, every one of these threads are the same.

What holds the model up now is not just ads. It's not the studios getting ad money and "greedy" cable taking the subscription. It's ads + subscription that makes it all go now.

We already have Apple's cut at al-a-carte. Had it for years. Subscribe to just the shows you want via the iTunes store. They even come with the benefit of commercial-free.

The al-a-carte that many think they can get (apparently by whining) is whole channels for near nothing. In other words, their math is 200 channels / $100 per month = 50 cents per channel. "I" want 10 channels, so my "new model" price should be about $5. Take 95% of the cash flow out of any business and that business will die.

The "requires cable subscription" issue is simple. All of the other players besides us consumers LIKE the model "as is". To make the big change "we" desire, THEY need to see how they are going to make MORE money- not less- by switching to what "we" seek. You guys keep whining about cutting the cord and cutting THEIR cash flows too. They don't want to make less money.

How much is all those commercials worth in a monthly fee (for commercial-free) terms? I've done the math a few years ago. To get rid of all of the commercials and replace that with a monthly fee to make up for them, it would cost every household in America about $54/month.

The al-a-carte crowd is generally dreaming of $5/month, $10/month or maybe as much as $20-30/month. Plus $54/month? No way. But "we" expect the people that make the shows "we" do want to watch can keep making those shows anyway.

Then, there's the miserable dependency of any "new model" replacement over the internet. To connect us consumers with the cloud requires the replacement to work through pipes owned by the cable middlemen who likes their cable revenues "as is" now. Even if an Apple could motivate the Studios to take a HUGE risk and embrace the "new model" now, why should the cable middlemen allow Apple to take their cable TV revenues without making up for that revenues in- say- higher broadband rates.

I love the dream as much as the next guy but it falls apart as soon as we think beyond our own self interest. Very simply, the rest of the players in the chain can NOT make more money AND Apple piling on for a big cut while "we"- the source of all of the money in the model- get a huge discount. We already have programming created on the dirt cheap that might fit the al-a-carte "dirt cheap subscription" dream. It's called youtube.
Score: 10 Votes (Like | Disagree)

rctlr
I only with the BBC would put iplayer on it, then it's game over for the PC attached to the TV in our household.
Score: 8 Votes (Like | Disagree)
Read All Comments