Apple today released the fourth beta of iOS 8 to developers, two weeks after releasing the third beta update and more than a month and a half since unveiling the new operating system at the Worldwide Developers Conference.

The update, build number 12A4331d, is available through Apple's over-the-air updating system on iOS devices and can also be downloaded via the iOS Developer Center. Apple has also released Xcode 6 beta 4 and a new Apple TV beta. 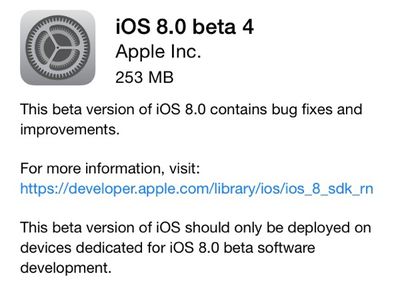 iOS 8 beta 4 includes several new features, like a redesigned Control Center and the introduction of a new Tips app. For a full list of changes in the beta, make sure to check out our iOS 8 Beta 4 Tidbits post.

Currently, iOS 8 is only available to registered developers, but the operating system is expected to be released to the public this fall after several beta iterations. Based on past history, iOS 8 will likely be launched alongside new iPhones, and possibly the much-rumored iWatch.

Just maybe I need to update my iPhone. I think I'm still on Beta 1 or 2. Lol. That's only because my N5 is my primary device.

A broken clock is right at least once a day as well. ;)
Score: 6 Votes (Like | Disagree)