Bill Campbell Reflects on 17 Years on Apple's Board of Directors

Alongside his resignation from Apple's board of directors after 17 years of service, Intuit chairman Bill Campbell spoke with Fortune about his time with the company, sharing some insights about the company he first became associated with over 30 years ago as a marketing executive. 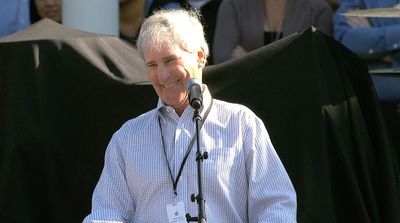 Bill Campbell at Apple's "Celebrating Steve" event relating the story of Steve Jobs trying out Siri
Among the topics touched on by Campbell was the conflict he faced while serving on Apple's board while also assisting Google's then-CEO Eric Schmidt, a situation not always embraced by longtime friend Steve Jobs.

“Steve would say, ‘If you’re helping them you’re hurting me.’ He would yell at me,” recalls Campbell, whose normal banter typically needs to be sanitized for most publications. “ I’d say, ‘I can’t do HTML, come on. I’m just coaching them on how to run their company better.’” He continued in both roles for years.

Long seen as "Steve's guy" on the Apple board, Campbell also had praise for Tim Cook, who has been officially at the helm of Apple for nearly three years now.

“Apple is an institution now,” he said. “Tim’s done an amazing job of building bench strength within the organization. There’s a whole set of new and smart people who are taking over. You’re watching that company grow up.” [...]

“Tim is a calm, thoughtful guy,” he said. “He studies things and thinks about them, makes a decision, and moves on.”

Highlighting his feelings on Cook, Campbell notes that Cook has thoughtfully offered to make a contribution in Campbell's honor to recognize his service to Apple. That unspecified contribution will involve Campbell's home town in the Pittsburgh, Pennsylvania area.

nutmac
I have been Apple's shareholder for well over 10 years. One thing I always voted against, was keeping Bill Campbell on the board. Intuit has consistently and intentionally produced inferior applications for Mac, starting with perhaps their biggest insult, Quicken for Mac.
Score: 10 Votes (Like | Disagree)

"Apple is an institution now," he said. "Tim's done an amazing job of building bench strength within the organization. There's a whole set of new and smart people who are taking over. You're watching that company grow up." [...]

I like hearing this. Tim's the guy to lead a grown up Apple. Steve knew that, hence why he recommended the board put Tim in charge.
Score: 10 Votes (Like | Disagree)

IJ Reilly
Campbell's company sure showed Apple a lot of love. How he remained so close to Steve is a mystery to me.
Score: 7 Votes (Like | Disagree)

jeremysteele
I always found it quite ironic how the Intuit chairman was on our board - yet their offerings for Mac OS (classic and X) have always been complete garbage compared to the windows versions.
Score: 3 Votes (Like | Disagree)

What does he mean by "Apple is an institution now"?

Apple has been an institution for some time, no?


I would say he's pretty spot on. You have to remember Apple's ascendance to the top of the heap is a relatively new occurence. Only a decade ago Apple's net revenue was only $8 billion. 5 years ago it was $36.5 billion. Apple didn't cross that magical $100 billion in net revenue until 2011.

My biggest gripe with Bill Campbell is that for almost a decade now he has allowed Intuit/Quicken for the Mac to languish with problems of incompatibility with OSX (Lion, I believe), iOS, lack of support, lack of improvements and sheer and utter lack of responsiveness.

Quicken was a piece of software that was an early hit with the Mac Community -- nothing else including the Intuit-owned Mint (anybody heard anything about that lately?) has even come close to taking Quicken's place.

Mr. Campbell ought to give the software to Apple and let it get the development it's due. Now that it's APPLE/IBM such an action might be worthy.

It always has bothered me that Campbell's Intuit just ignored the Mac audience that helped building the company and has continued to adapt, improve and support the Windows world.

I, for one, think a not so very good friend has left the building and his exit need not be bemoaned.
Score: 2 Votes (Like | Disagree)
Read All Comments