Earlier this month, Apple began cracking down on some of the methods developers use to monetize their apps, rejecting some apps that offered rewards for viewing videos and sharing content on social networks.

Developers were understandably upset about this policy change, as offering opt-in ads in the form of rewards for video watching provided a way to generate revenue without significantly disrupting gameplay. Providing in-game currency, extra lives, or another incentive for watching an advertisement has become common in freemium games. 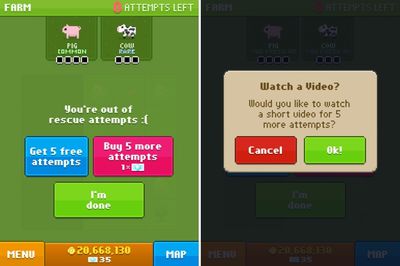 Apple now appears to have reversed course on its decision to reject apps for using these promotional methods, with TechCrunch noting that Apple has ceased rejecting apps for using incentivized ads and has changed its opinion on some previously rejected apps.

Sources in the video ad industry have reported that app rejections related to this matter have now declined, indicating the policy is being rolled back.

We're also hearing that some of the initial, and more worrisome, rejections are being undone -- that is, the apps are being allowed back in the App Store.

While Apple is allowing developers to continue to offer an in-app reward for users who watch a video or post about an app on social media, the company is still rejecting apps that offer incentives to users for reviewing an app, rating an app, or downloading another app, as reviews and ratings can affect an app's position on the Top Charts.

Manipulating the App Store charts is explicitly forbidden in Apple's app guidelines under rule 3.10, which states that developers who attempt to "manipulate or cheat the user reviews or chart ranking in the App Store with fake or paid reviews or any other inappropriate methods" can be removed from the Developer program. Thus, under Apple's new rules, developers appear to be able to allow users to watch ads for other apps, but are unable to encourage users to download those apps.

Basically, developers are fine to reward viewing video ads, whether for their own apps, those belonging to others, or brand ads, but they can't reward anything that also has a direct download piece to it.

This change will likely be a relief to developers who rely on such incentives to promote their apps to a wider audience. iOS 8 is will also bring several changes to the App Store that will help increase app discovery, including an improved App Store search algorithm, an "Explore" feature that makes it easier to find apps, and app bundles that offer several apps together for a discounted price.

redkamel
I wish there was an option to search on the App Store for apps that have no ads, or for apps with no in app purchases.
Score: 29 Votes (Like | Disagree)

Well that didn't last long at all. I was hoping this was the start of a much needed change so this is disappointing news indeed.
Score: 15 Votes (Like | Disagree)

Lord Hamsa
That's a good correction. The initial change was a bit too draconian. What's wrong with opting in to watch an ad?
Score: 9 Votes (Like | Disagree)

WaxedJacket
I've given up on iOS games for the most part. They're all this freemium crap anyway. Ended up purchasing a 3DS XL instead. Having much more fun :o
Score: 7 Votes (Like | Disagree)

AngerDanger
Oh, darn, I guess I'll have to stick to using my measly intellect to discern cheap, IAP-driven apps from quality, lovely apps. This should be incredibly difficult. :rolleyes:

Seriously, if you don't like freemium apps, avoid them. They're great revenue generators for those who develop them and hours of fun for those who like them.
Score: 6 Votes (Like | Disagree)

Teste
The app store feels like a flea market now. It has thousands of incredibly bad apps trying to deceive people into giving them a top position in the charts, with clone after clone, while the very few really good apps get lost in the sea of mediocrity.
Score: 5 Votes (Like | Disagree)
Read All Comments