The Unicode Consortium today announced version 7.0 of the Unicode Standard, which will see the introduction of approximately 250 new emoji that could be included in future versions of the Android and iOS operating systems.

According to the Unicode Consortium, the new emoji characters are primarily derived from characters used in the Wingdings and Webdings fonts, as seen in an example image: 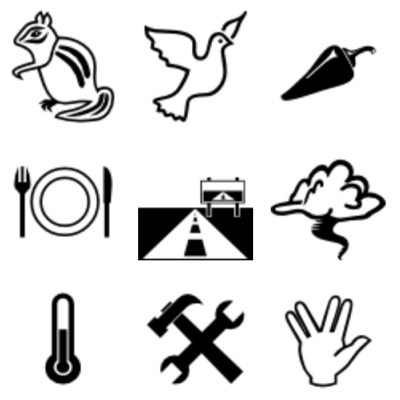 As noted by The Verge, Unicode member platforms like iOS and Android will need to implement support for the new standard and create pictographs to represent the emoji, which are only described by Unicode in plain text.

A full list of the new emoji names can be found on Emojipedia, which includes descriptions for each future emoji. A few examples are posted here:

Earlier this year, Apple began working with the Unicode Consortium to introduce more characters to its emoji offerings, adding diversity to the character set, but this update does not seem to focus on people emoji.

The Unicode update will also see the addition of new currency symbols for the Russian ruble and Azerbaijani manat, 23 lesser-used and historic scripts, plus many other symbols.

;) The ones who make some clever comment that has a double meaning. Or the ones who repeat something that has been said too much (Safari is snappier)

:D :apple: The fanboys who praise Apple no matter what they do (These new emojis make Apple the most innovative company)

:o The ones who were completely wrong about their predictions (The iPhone will never have third party keyboards)

:( The ones who think Apple is going downhill (Bigger screen? Apple is running out of ideas)

:) The helpful ones who simply report the facts. (You can go to https://www.apple.com/ios/ios8/icloud-drive/ to find out more about iCloud Drive)

:confused: The ones who question all of Apple's business decisions. (3 million for Beats? What are they doing?)

:eek: The ones who overreact to all news. (OS X Yosemite was designed for retina screens? Screw you Apple. You don't think my 2010 MacBook is good enough?)

:rolleyes: The ones who make snarky sarcastic comments. (Yeah, Tim Cook totally cares that he's losing such a loyal customer.)

:cool: The ones who like to brag. (Actually, I have a 64 GB gold iPhone 5S, so I am on the latest hardware, thank you very much.)

:p The trolls that seem to increase in number each day. (Jony Ive should apply his thinner design principles to himself)

headfuzz
Wow. This is totally the news I've been waiting for all year.

needfx
Live long and prosper would be the only one I would ever use
Score: 10 Votes (Like | Disagree)


There's the one I'll be using!!!
Score: 9 Votes (Like | Disagree)
Read All Comments