Amazon today officially launched its Prime Music streaming music service, offering Amazon Prime users unlimited, ad-free streaming on over a million songs. The service allows users to play specific curated playlists as well as the ability to add individual songs to a playlist, and offers unlimited offline playback for all songs available on the service. 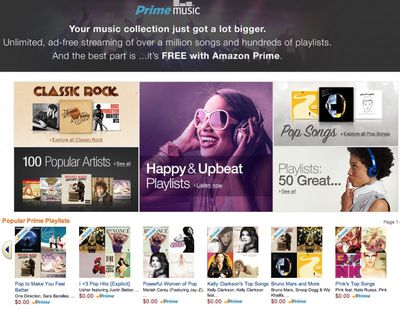 Amazon has also rebranded its Amazon Cloud Player iOS app as Amazon Music [Direct Link], offering a refined interface and allowing users to access songs on the service, with tools for managing a library and playlists. Like the web interface, Amazon also allows users to download music from Prime Music to a mobile device for offline listening.

As previously reported, Amazon's music catalog appears to only include songs older than six months, likely to save the company on royalty costs. By comparison, other streaming music services such as Spotify, Rdio, and Beats Music all offer new releases to their subscribers. Apple's iTunes Radio also offers new releases to listeners, however the service is centered more around users discovering new music through stations as opposed to searching for individual songs.

Amazon Prime Music is available now as a free service to current Amazon Prime members, with Amazon charging $99 per year for new Prime members. A free 30-day trial to the service is also available on Amazon's website. The company is also expected to announce a smartphone with 3D capabilities next week Wednesday, June 18.

randian
Wonderful. Amazon raised the price of Prime $20 to give me a service I didn't want.
Score: 21 Votes (Like | Disagree)

velocityg4
Great more garbage I have no desire to use. Amazon really needs to make a tiered service. So that those whom just want delivery can get that. I have no interest in the music and the movies included with Prime are absolute garbage and loaded with artifacts due to the absurdly low bit rate.
Score: 9 Votes (Like | Disagree)

They are definitely trying to kill off the delivery part of prime, otherwise they surely would give the option of delivery only without forcing people to take an instant film streaming (and or music in the future) that they may not want

That doesn't make any sense to me. Bundling their services together like this is a very clever way to grow market share and get people to check out the Amazon eco-system. Prime delivery is still the most important part of Prime to most subscribers.
Score: 9 Votes (Like | Disagree)

Chupa Chupa
Interesting addition. I'll take it, but shipping is my "prime" interest, and Amazon is cutting off more and more items all the time by classifying them as "add on".

I think Amazon is becoming a Jack-Of-All-Trades, master of none. Or maybe the all you can eat buffet w/ nothing appetizing being served. Prime is feature rich but the content is very thin. Is streaming mostly backlist albums going to sell more Amazon devices (phones, Fire TVs, etc) ? I kind of think not.
Score: 8 Votes (Like | Disagree)