Recent reports suggest Amazon may be preparing a smartphone with 3D capabilities to compete with Apple's iPhone and Samsung's Galaxy handsets. New details from BGR and TechCrunch shed some light on this 3D feature and possibly provide us with our first look at the phone, which is partially hidden inside a case. 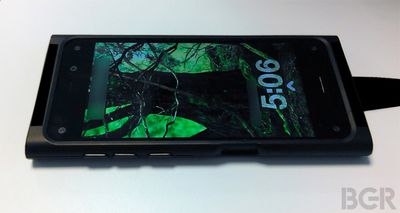 According to BGR, multiple sources claim the phone will include a 4.7-inch display with 720p resolution, which is lower than the 1080p HD display in Samsung's flagship Galaxy S5 and less than the projected 1334x750 display that Apple may use in the iPhone 6. Under the hood, the Amazon phone is predicted to be powered by a Qualcomm Snapdragon processor and 2GB of RAM.

The biggest differentiator between Amazon's smartphone and those from Apple and Samsung is a 3D feature, which allegedly uses up to 4 cameras and additional sensors embedded in the phone. Amazon may use the 3D technology to showcase its own products, allowing users to explore a three-dimensional product images, claims BGR.

Another smart use for the phone’s 3D effects is across Amazon’s various stores, such as its book store, music store and the main Amazon digital market. By shifting the position of the phone, users are able to see three-dimensional product images at different angles to reveal surfaces that cannot be seen in 2D photos.

The 3D capability of the phone may also provide a parallax effect, similar to that in iOS 7. Amazon's implementation in its FireOS may be greatly exaggerated as compared to Apple's version and supposedly is limited to only a few key gestures, reports TechCrunch.

According to our source, the flagship device, Duke, is powered by a heavily modified version of Android. It’s FireOS with extreme 3D parallax effects, similar to those found on iOS but greatly exaggerated. The screen itself is not 3D, but rather simulates a 3D effect.

By way of four corner-mounted, front-facing cameras, a user can tilt the smartphone left or right to browse and access hidden side panels. We’re told that the 3D feature is very limited out of the box. At launch, there will be just a couple of added gestures built into the operating system that utilize this system.

Rumors point to a possible announcement in the coming months with a target launch date of late September, but this may be subject to change. Amazon allegedly is showcasing the device to key developers as it tries to build third-party support for the platform before it is launched.

So, I'll finally be able to send this 'text' message.
Score: 34 Votes (Like | Disagree)

Orlandoech
Love iPhones, never been a huge fan of Android phones, although there are a lot of good Android phones, I just see this a an EPIC FAILBOAT
Score: 19 Votes (Like | Disagree)

3D is going to be the next big thing. Pretty soon all TVs, Movies, and Games consoles will be 3D, and everyone will want that experience on their phones as well.

Apple and Samsung will be scrambling to catch up!!!


I'm pretty sure most of us who've "experienced" 3D have already attested to the fact that we're neither impressed nor interested.
Score: 15 Votes (Like | Disagree)

Jack Delgado
Behold! A phone not made by Apple!

D.T.
Hopefully it’ll have ads like the Fire tablets:

“This call to your Mom brought to you by Black & Decker”

Yes you can turn pay to disable those, and of course this product won’t have them ... : )
Score: 12 Votes (Like | Disagree)
Read All Comments