iOS 8 Ditches Yahoo Weather for Content From The Weather Channel 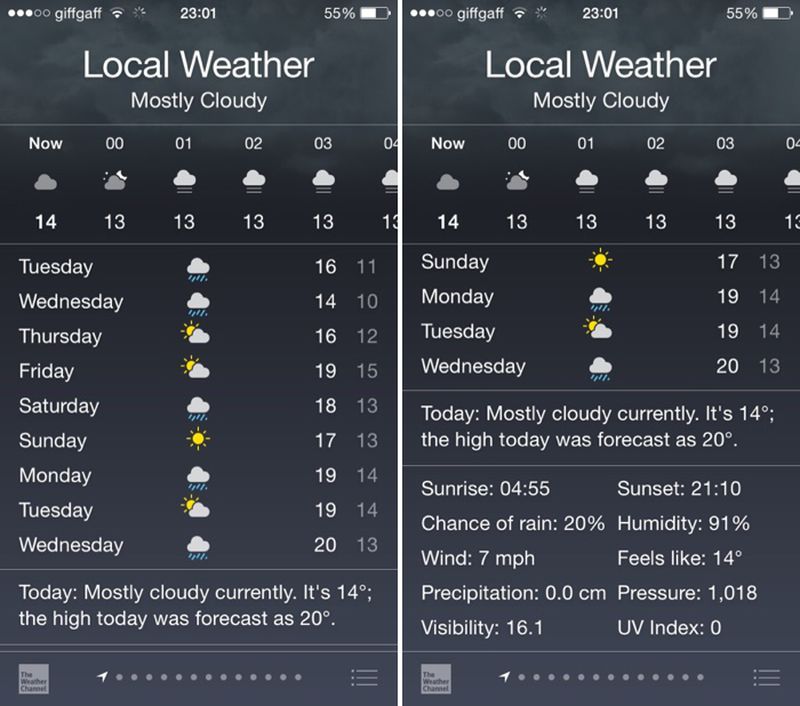 Yahoo's weather information, however, was also supplied by The Weather Channel (TWC), so it seems that Apple has opted to cut out Yahoo as a go-between. The switch from Yahoo to TWC is a bit surprising given reports of ongoing talks between Yahoo and Apple over ways to more deeply integrate Yahoo services into iOS apps. While it is unclear if those plans have been scrapped, an April report suggested Yahoo was aiming to revamp its mobile search platform with the hopes of being iOS's default search engine.

While the source of the data Apple uses is ultimately the same, there are differences in the underlying technology supporting the weather data between the two services. Because of that, the data presented to the end user may be slightly different even though Yahoo also obtained its data from TWC.

In addition to using TWC as a source for weather data, the iPhone's weather app is now displaying a nine day weather forecast, up from the previous five day forecast. There's also a new weather summary at the bottom of the app, noting the current weather conditions along with conditions for the rest of the day.

The new Weather app within iOS 8 is currently available to registered developers. The general public will get access to the operating system this fall, after beta testing has been completed.

lodolfo
What a shame... now how am I going to know what the weather is NOT going to be like?

If Yahoo! says it will be sunny today, I take it as a guarantee that it will be anything but sunny today. Can The Weather Channel give me that reliability? I think not!
Score: 14 Votes (Like | Disagree)

macnerd93
The Yahoo Weather app is beautiful on iOS :) use it more than the proper default iOS app.
Score: 11 Votes (Like | Disagree)

And I live in LA so it's not as if we're some obscure city.


LA used to be more obscure; but you guys really cut down on the air pollution.
Score: 6 Votes (Like | Disagree)

If the default weather app had that, I could ditch the others.
Score: 6 Votes (Like | Disagree)

Bad move. This reminds me of when Apple ditched Google Maps.

Yahoo has a beautiful weather app, it's the only weather app I use. And I find it to be very accurate.

When is all those changes suppose to happend?

Tuesday March 31, 2020 10:22 am PDT by Juli Clover
Apple has acquired weather app Dark Sky, Dark Sky's developers announced today. Dark Sky is one of the most popular weather apps on the App Store, known for its accuracy and storm warnings. Our goal has always been to provide the world with the best weather information possible, to help as many people as we can stay dry and safe, and to do so in a way that respects your privacy. There is no ...
Read Full Article • 191 comments