Apple and Yahoo In Talks Over Deeper iPhone Partnership

The Wall Street Journal is reporting that Apple and Yahoo have been discussing how to integrate Yahoo's services more prominently in iOS, beyond powering the Weather and Stocks apps.

Yahoo also provides sports scores to Siri, but Yahoo has significant content deals related to news, sports and finance that could be tapped.

Data from Yahoo Finance and its weather site already come preloaded onto iPhones and Yahoo data like sports stats help power Apple's voice-activated "assistant" Siri. But the companies continue to discuss new arrangements, including possible deals to get more content from Yahoo Sports and Yahoo News, among other Yahoo Web properties, preloaded onto Apple devices or available through an expanded partnership with Siri, one of these people said.

The WSJ also says Yahoo would like to provide search results to Apple in Safari, but Microsoft's Bing search engine currently powers Yahoo Search and Apple has a long-term deal with Google as the default engine on iOS.

The paper did note that no deal is imminent, and negotiations appear to be in the very early stages. Former Google executive Marissa Mayer took over as the CEO of Yahoo recently and has been focusing a lot of energy on Yahoo's products and content, rather than its traditional strengths in advertising.

4TheLoveOfTech
Way to partner with a winner. Yahoo is about as popular as Alta Vista.

I hear Netscape is looking into getting in on the action as well.
Score: 36 Votes (Like | Disagree)

Seriously though, if I ever see "Yahoo Search", or "Bing Search" on my iDevices, I'm out the door. 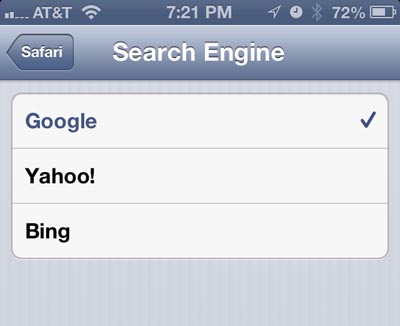 Apple, you start putting Yahoo on your phones and Samsung win another customer.


Yahoo has always been on the iPhone.
Score: 20 Votes (Like | Disagree)

Way to partner with a winner. Yahoo is about as popular as Alta Vista.

You sure about that?

I wrote this four years ago and much of it remains true today.

Way to partner with a winner. Yahoo is about as popular as Alta Vista.

Wordman
Apple, you start putting Yahoo on your phones and Samsung win another customer.
Score: 9 Votes (Like | Disagree)
Read All Comments