With the release of updated 11 and 13-inch MacBook Air models, multiple retailers have begun dropping the price on older versions of the MacBook Air. Because the only upgrade to the 2014 MacBook Air is a slightly improved processor, the lower prices on 2013 MacBook Air models are appealing to consumers looking for a deal. 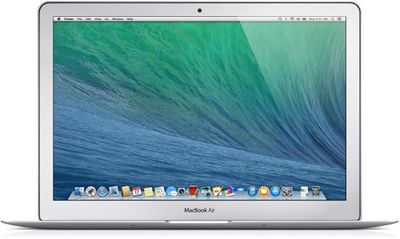 Apple has been selling a 2012 11-inch MacBook Air for as low as $599, but all models are currently sold out. The best way to get a deal from the refurbished store is to check stock on a regular basis.

For those looking for one of the newly updated MacBook Air models, those start at $899 for the 11-inch version and $999 for the 13-inch version, with stock available directly from the Apple Online Store. Sales tax will vary depending on which vendor you order from. B&H Photo, for example only charges sales tax in New York.

MacRumors is affiliate partners with some of these vendors

EDIT: I just realised how condescending and snobbish that sounded. If it meets your needs, I'm happy you've got the discount. I'll leave the original post so that it can mark my shame.
Score: 4 Votes (Like | Disagree)

But they're all at 4GB RAM. Not a single one is a good price.

If all one does is open a handful of tabs in Safari and run iTunes, he may be able to get away with 4GB of RAM. But if one starts running even a moderately demand apps such as iPhoto and iWork simultaneously, 4GB would quickly trigger page outs.

Even with memory compression, Mavericks still can't do wonders with 4GB RAM. And once OS X starts to page out, the only way to recover is reboot.

With MBA not being user upgradable, it would be most unwise to not spend $100 more for 8GB RAM.
Score: 2 Votes (Like | Disagree)

I personally didn't take offense at your o.p., but humility is something you don't encounter much on rumor sites, and is refreshing. More to the point, these price cuts are real nice, and the prices on the refurb store for those superseded models are definitely worth considering.

I agree, I also don't see anything wrong with your comment. I think you are just printing out some of the obvious issues. The Macbook Air is great, but what people might want to keep in mind, is that unless you have money to throw around (e.g., buy a new one in 1-2 years because the computer feel sluggish), you should be careful about the initial investment. Giving that you can't update the MBA at all (unlike the Macbook Pro), you are basically stuck with what you buy. So that's very important to keep in mind, especially what you need in your machine to start with.

SkippyThorson
I caught the $599 11.6" MacBook Air with a 64gb SSD, and I debated for a while before I sprung for the purchase.

Then I immediately reconsidered because I caught the 128gb version for only $80 more at $679.

I couldn't resist. My aging 2008 Alu. Uni. MacBook is probably out of luck when the next OS comes around, and I figured the other half would love this if I decide to keep the iPad over the MacBook Air.

That would be an even better replacement for her 2007 MacBook - happy wife, happy life!

Either way, long story short, some of those refurbished MacBook Airs were way too good to pass up!
Score: 2 Votes (Like | Disagree)

But they're all at 4GB RAM. Not a single one is a good price.

EDIT: I just realised how condescending and snobbish that sounded. If it meets your needs, I'm happy you've got the discount. I'll leave the original post so that it can mark my shame.

I personally didn't take offense at your o.p., but humility is something you don't encounter much on rumor sites, and is refreshing. More to the point, these price cuts are real nice, and the prices on the refurb store for those superseded models are definitely worth considering.