Earlier this week, Bloomberg reported that Apple has plans to integrate song identification features into iOS 8 through a partnership with audio discovery platform Shazam, but as suggested by media professor Aram Sinnreich, Apple's ambitions may go beyond simple music recognition capabilities.

Speaking with Computerworld, Sinnreich, a media professor at Rutgers University, points out that Apple could use Shazam's audio recognition abilities to gather information on the media that iPhone and iPad users are consuming, including music, television shows, movies, and more, for targeted advertisements. 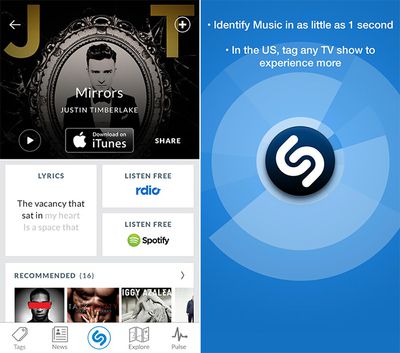 While Shazam is known for identifying songs that are playing on the radio or through other sources, the service is also capable of identifying and tagging television shows and advertisements. Shazam works by analyzing captured sound and comparing its acoustic fingerprint to an audio database, which began including television content in 2012.

Shazam's technology could, of course, be used to deliver music and television information to consumers, providing identification along with additional content like news, facts, and iTunes purchase links, but at the same time, Apple could also use it to gather information on consumer preferences each time a song, television show, or advertisement is "tagged" or identified by a user, allowing the company to use those preferences to deliver more targeted ad suggestions across iOS.

Sinnreich pointed out that Shazam has been indexing advertisements broadcast on television, as well as the pre-show ads shown in movie theaters, and in some cases, has stuck deals with advertisers to provide metrics of those who "tag" an ad. In some cases, tagging an ad presents the consumer with additional information, or even a special offer.


This functionality would allow Apple to know what a user prefers to watch and listen to. For example, if someone was watching Downton Abbey or Game of Thrones, Apple's media recognition capabilities could theoretically automatically identify what's being watched, cataloging it for future use in advertisements. Sinnreich likens this functionality to an audio QR code.

"Apple could do whatever a QR code is used for now, but sonically," said Sinnreich of the audio fingerprinting technology. "Someone tags a commercial, and that's entered into a database, effectively targeting [that consumer] for further ads," he said.

While Sinnreich's theory is mere speculation at this point, it does fit in with Apple's current advertising methods, which the company says include "exceptional targeting." Apple has been working to expand its iAd platform in recent months, moving beyond app advertisements to encompass iTunes Radio ads as well. Further improving its targeting methods could entice major advertisers, which has been the company's goal -- recently, Apple made it simpler for advertisers large and small to sign up for the platform, eliminating the need for a developer account.

Apple's audio recognition capabilities are said to be coming alongside iOS 8, which is expected to make its debut during the company's Worldwide Developers Conference in June. The operating system will likely be released to the public later in the year, in September or October.

"...allowing it to run in the background to continually listen for various audio content.", #1984


Presumably such a setting would be able to be turned off in the Privacy settings, much like Location Services. Possibly would be able to use it without advertising tracking too under the existing Limit Ad Tracking function. Just a thought -- I'm sure consumer outcry and experiences with Location Services would have Apple implementing such a feature with a good bit of caution.
Score: 8 Votes (Like | Disagree)

revilowaldow
"...allowing it to run in the background to continually listen for various audio content.", #1984
Score: 6 Votes (Like | Disagree)

Don't do this, Apple. We don't need another Google.


In which world does Apple not want a slice of Google's pie?

You can spin it any way you want, but Apple will move into advertising in a big way. While that isn't necessarily a bad thing, it will remove one of the off-the-shelf derogatory comments hurled at Google at every opportunity.
Score: 5 Votes (Like | Disagree)

Apple will indeed move more into advertising--somewhat. But they will NOT be like Google. Because Google makes nearly ALL their money from advertising: from selling your information to advertisers.

BOTH Apple and Google sell anonymous targeted slots, but NEITHER one sells any personal info to advertisers.

The personal info that Apple gathers from their stores like iTunes, and the info Google gathers from services like Search, are only worth ad placement money as long as it's kept secret from advertisers.
Score: 3 Votes (Like | Disagree)


Would be funny if it could identify the "actress" based on her, uh, "acoustic fingerprint" as they say :D
Score: 3 Votes (Like | Disagree)

In which world does Apple not want a slice of Google's pie?

You can spin it any way you want, but Apple will move into advertising in a big way. While that isn't necessarily a bad thing, it will remove one of the off-the-shelf derogatory comments hurled at Google at every opportunity.


Any "off-the-shelf derogatory comments hurled at Google at every opportunity" comments are totally Googles own doing. People see the shady antics of google and they call them out for it. Perhaps the google reality distortion field stops you from seeing what they are doing but its time to wake up and see google for the privacy breaching shady company they truly are.
Score: 3 Votes (Like | Disagree)
Read All Comments