How Apple Could Make the Move to 4.7" iPhone Displays

Amidst the flurry of iPhone 6 rumors coming from KGI Securities' report last week, Ming-Chi Kuo presented the first possible screen resolution for Apple's 4.7" iPhone 6. Kuo lists it as a 1334x750 Retina display with a pixel density of 326 pixels per inch.

Historically, Apple has been very cautious with resolution changes in their iOS devices. The original iPhone was launched with a 320x480 resolution. Eventually, Apple moved to 640x960 Retina display, doubling the linear resolution in each dimension. That allowed existing apps to simply be pixel-doubled to fill the entire screen. Developers could then take their time to update their apps to fully support the higher resolution display. When Apple moved from 3.5" to 4" screens in the iPhone 5, they simply added vertical resolution. This allowed existing apps to run in a letterboxed format with black bars at the top and bottom of the screen. 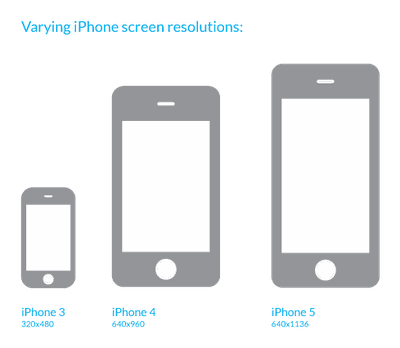 Relative iPhone display sizes by Redtech
Right before the 4" iPhone releases, Apple began encouraging developers to use AutoLayout in designing their apps:

Auto Layout is a system that lets you lay out your app’s user interface by creating a mathematical description of the relationships between the elements. You define these relationships in terms of constraints either on individual elements, or between sets of elements. Using Auto Layout, you can create a dynamic and versatile interface that responds appropriately to changes in screen size, device orientation, and localization.

AutoLayout paves the way for apps to more easily adapt to changes in display sizes and resolution in the future.

If Apple were to adopt a 1334x750 4.7" display as predicted by Kuo, it would preserve the same pixel density (326 ppi) as the iPhone 5s. That means that all existing user interface elements, such as icons, would be the same size but would allow for more screen space.

Meanwhile, existing unoptimized apps could function in a "letterbox" style with black borders for unused screen space. TheVerge forum user Pi is exactly 3 created a mockup showing this exact scenario. This image shows how an "unoptimized" app would appear (left) compared to one that has been optimized for the 4.7" display (right):

Mockup by Pi is exactly 3
Given Apple's past reluctance to blur or break existing apps, it seems that this resolution choice could provide Apple and developers a reasonable upgrade path for a larger factor iPhone. Apple has acknowledged that customers want larger iPhones and all iPhone 6 rumors are pointing to a larger iPhone device this year.
Related Forum: iPhone
[ 429 comments ]

green tea
but Apple and all the fan boys said 3.5" is the perfect size :D
Score: 26 Votes (Like | Disagree)

iCore24
I still think they will double the iPhone 5s resolution, 326 ppi on a 4.7" is good but is not future proof. If they make a bigger iPhone in the future like 5" it would have around only 300 ppi, then will need to get ANOTHER resolution change! I talk about this in detail in a thread I made if your interested.
https://forums.macrumors.com/showthread.php?t=1699542

And they better come up with something more productive and creative to take up the extra space on the iPad and the iPhone 6 with IOS 8. The iPad just got the hand me down features the iPhone got on IOS 7, The iPad needs features that take advantage of the huge landscape,
Split screen? Widgets? Live larger icons? SOMETHING!!!!!
Score: 25 Votes (Like | Disagree)


would look even worse if the graphics are stretched and blurred
Score: 16 Votes (Like | Disagree)

Just horrible as an Apple phablet. That's a mistake if it ever is made. So many Apple phablet rumours these days. We have 2 options:

1. The rumours are all wrong. No harm done.
2. Apple will make the mistake of making an Apple phablet.

If No.2 happens I will be upset. I want to buy an iPhone 6 maybe. But if Apple only releases the iPhablet 6 then I'll be forced to buy old tech or stick with my iPhone 1.

And making both an iPhone 6 and an iPhablet 6 is a no go as well. Apple already have enough SKUs. Too many is what ****ed Apple up in the 90s. No going and repeating that all over again.

Apple is on the cusp of me not buying the iPhablet 6 (or any iPhones anymore). Even though I do like the iPhone line, I don't want to buy a phablet.


Whatever dude nice rant but 4,7 is not a phablet especially if they make a clever design not even close.