Members of the press were given a tour of Apple's newest retail store in Istanbul, Turkey before its grand opening tomorrow, April 5th, reports Apple Toolbox. Leading the tour was Apple's manager of retail stores, Steve Cano, who confirmed that CEO Tim Cook will not attend the opening as originally expected. Turkish President Abdullah Gül also will postpone his visit until after the retail store is opened. 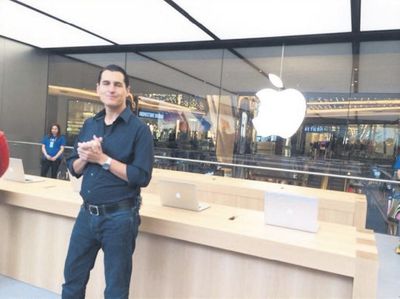 The 20,000 square foot store, which is located in the upscale Zorlu Center, features a unique cubic design with a glass ceiling and glass sides. According to Cano, the store uses more glass than any previous Apple Store and contains special glass materials that take full advantage of the sun light in the open area of the mall.

The Apple Retail Store at the Zorlu Center is set to open at 10:00 AM this Saturday, April 5, with Apple sending out announcements via email to Turkish residents. Similar to other retail openings, store employees will be giving away Apple t-shirts to the first 4,500 customers who enter the location on Saturday. The Istanbul location is Apple's 424th retail store worldwide.

Yamcha
Wow that store is gorgeous, by the way I find it funny when closed minded people leave comments.. Turkey is a beautiful place with beautiful people, so are many other places in the Middle East..

Travel broadens the mind, I've been to some of these places, the people are the most welcoming and kind around, despite what you hear from the mainstream media which by the way are owned by corporations..

Just wanted to say that because, whenever people talk about this region they always point out the bad and never the good, and I find it disgustingly insensitive and frankly rather immature, learn some empathy for others..
Score: 16 Votes (Like | Disagree)

still allowed to own personal computers in Turkey ?? -_-

Their government obviously hasn't figured out that its better to secretly monitor what everyone is doing on the internet rather than trying block bits of it :rolleyes:
Score: 10 Votes (Like | Disagree)

emir
I live in Istanbul and I personally didn't like the store. It didn't live up to my expectations but then again I had really high expectations.

The mall in which the Apple Store is located has pretty low ceilings and going around on the inside is not very pleasant, it feels squashed. The mall was expected to be the next big thing in the city where everyone would frequently visit, it had incredibly high rents and a buzz around it but the expected hype just didn't happen. Apple Store is seen as the last resort to save the entire mall, luring customers in it. So just like ShangHai or 5th Avenue stores, I thought it would use that open space for entrance to compensate for that squashed feeling by entering from the outside, open air. However it turns out it's just used as a way of bringing in natural light. I even expected a glass dome entrance being a reference to all the historic mosques of the city.

On the inside the mall still feels squashed, the store has two stories, both walls covered with glass much like the new Palo Alto Store and the new planned San Francisco Union Square store. I can't be exactly sure as of now though because I haven't actually seen it yet. I'll see it tomorrow at the opening and make my definitive decision.

Nonetheless, the store opening and Apple officially incorporating in Turkey means a lot of things;
-Products launching at the same time with the rest of the world.
-Reasonable prices were brought in with the official online Apple store a few months ago, now other electronics stores can't and won't sell Apple products with giant premiums making it even more expensive.
-Apple products bought from all over the world are now covered with the 1 year global guarantee. Also, we can buy Apple Care, have genius bars, one to one services etc.
-Apple will reach to masses, not the geeks who have proficiency in English that are following Apple related news.
-Turkey is a developing economy with close to 80 million population, of which mostly are under 30, with a lot of tourist potential from Middle East considering the culture and geographic advantage. So it has a lot of sales potential for Apple, they could use it as a Middle East, Western Asia and Balkans hub just like Coca-Cola Company and many others do.

I think it'll be good considering they plan to open 5 stores in Turkey in 3 different cities by the end of 2015. Hopefully they can do great job here. I love iTunes Music store and the online store that opened a few months ago.

Regarding the political discussion about Turkey's latest internet scandal;

Bans on twitter and youtube were lifted twitter being yesterday and youtube being today with the rule of constitutional higher court. The government didn't have any legal basis on blocking them and it's unacceptable, they are just jokes that still can manage to get the votes of the uneducated unfortunate majority who only cares if they can find food money or not. Also, their main complaint was Twitter and YouTube not taking them seriously on some complaints that is allegedly against the law in Turkey. Their argument is, when the UK or the USA does file such complaints they immediately respond and do what's necessary whereas Turkey is considered a 3rd world country that is not taken seriously.

They are issues to deeply discuss so I will leave it there. Just know that Turkey would never become Iran, North Korea, Chine or the likes of them. It has a very secular 40% and has democracy in it's foundation. It couldn't even be compared to those countries. It is corrupt just like most of the other states, maybe more than other states but it doesn't make its people any less reputable, in fact latest events should make its people even more admired.
Score: 6 Votes (Like | Disagree)

still allowed to own personal computers in Turkey ?? -_-

Baumi
Regarding the inevitable comments about Turkey's politics:

Don't take it out on the country as a whole. It's a beautiful place, and I've met many very smart and friendly people there who are extremely upset and frustrated about the current situation. (At least 56% of the votes were not for the ruling party in last week's elections, possibly even more.)

Besides, so many people there are willing to stand up for their rights, although even peaceful protesters are being violently attacked by the police. Personally, I think that's worthy of respect, not ridicule.

Their current government, on the other hand... they deserve all the ridicule and disrespect you can muster. ;)
Score: 4 Votes (Like | Disagree)

I lived in China for 8 years. The number of websites that include "tweet" and "like" buttons, embed youtube videos, "use Facebook or Twitter to login", etc etc is very high. At in China, when a page starts to download an asset from one of those sites (a like button, some javascript for liking, etc) the whole loading process grinds to a halt until it times out after like 1 min. Massively painful. And obviously you can't use FB or Twitter credentials to login to websites.

Even when I wasn't going to FB, Twitter, Youtube, I basically had to get on a VPN just to have something even close to a reasonable browsing experience.
Score: 4 Votes (Like | Disagree)
Read All Comments