Work at Apple's new sapphire production plant in Mesa, Arizona is progressing, with contractors working "around the clock and even on weekends", according to a new report by AppleInsider. It also says Apple may be expanding into another building already existing on the site.

The site says Apple planned to have the facility up and running by February and it may be partially active as work continues. It also published a series of images showing the exterior of the building, though they are not particularly revealing. The building was built by a solar panel manufacturer but never saw production. 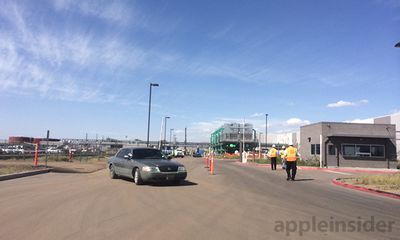 Rumors floating around the local electrical industry in Arizona claim Apple may be mulling a project expansion into a building on the site that was previously owned by photovoltaic panel maker First Solar. The purpose of the support structure is unknown.

Apple originally announced the 700-employee manufacturing facility, in partnership with sapphire-maker GT Advanced, back in November. Tim Cook said in an interview that the facility would be making sapphire for a "secret project" with other reports saying the plant will see full production beginning in the second half of 2014.

Before everyone gets the wrong idea, this is not for iPhone screens. This is probably for the iWatch or something else that's small and actually needs the superior scratch resistance sapphire offers.


Oh, thanks for the update Tim!!

Wait, you're not Tim Cook?? Then your guess is as good as mine.
Score: 7 Votes (Like | Disagree)

May I assume Che Guevarra is managing the guerrilla glass plant?

While this might all be true, consider that the iPhone is assembled in China, so the logic of manufacturing the glass in the U.S. is questionable.

Most guerrilla glass is made in the US, with the rest being made in Japan and Taiwan - none of which are china, and the cost difference between the three to throw it in a container and get it to china is negligible at scale.

Apple gets more control over the manufacture of sapphire, gets to advertise 700 new US jobs, and gets green energy tax credits as well as piles of municipal and state tax breaks for building where there did. It's a lot of wins and one relatively insignificant loss.
Score: 1 Votes (Like | Disagree)

Okay while his post was on the arrogant side, it's still a considered opinion in the sense that sapphire screens would hurt iPhone margins.


But it would give them a major selling point that Samsung can't easily duplicate - apple had to purchase and build the infrastructure necessary to meet the demand for sapphire on this scale, as it doesn't exist yet. Apple will be the only one in town who can do this for a year or two.

There are entire stores dedicated to repairing cracks and scratches in phone screens. Every mall has a dozen kiosks selling screen protectors. Otter boxes sell for $60-$100 and they're very popular - it's definitely a consumer priority

Something tells me apple would be willing to gamble a little bit of their profit margin to fight samsung in market share, especially since the tech specs race is basically a stalemate. Android is catching up bit by bit, Apple can't afford to stay stagnant when it comes to setting themselves apart.

Also, it's entirely possible Apple has managed to bring cost within tolerable range by controlling manufacturing and utilizing a sapphire laminate they had a patent on back in the fall (if I recall correctly).

Oh, here it is: http://www.patentlyapple.com/patently-apple/2013/09/apple-invents-a-fusion-process-that-will-add-a-sapphire-laminate-layer-to-iphone-ipad-future-iwatch-cover-glass.html
Score: 1 Votes (Like | Disagree)

Oh, thanks for the update Tim!!

Wait, you're not Tim Cook?? Then your guess is as good as mine.

mrxak
Before everyone gets the wrong idea, this is not for iPhone screens. This is probably for the iWatch or something else that's small and actually needs the superior scratch resistance sapphire offers.
Score: 1 Votes (Like | Disagree)
Read All Comments