A set of images depicting what could be a prototype of the next-generation iPhone were first shared with MacRumors by an anonymous Twitter user earlier today. Australian writer Sonny Dickson, who also shared some of the same images, told MacRumors that they were initially shared by someone in China who claimed the images show the "iPhone 6". 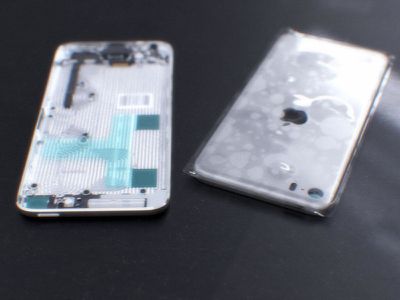 It is entirely unclear whether the device in the images is a legitimate iPhone 6 prototype or whether it is a fake. Early prototypes of the iPhone 5s and the iPhone 5c exhibited a blank rear shell while the iPhone 6 shell in the picture clearly shows FCC text that is generally added to the phone at a later date. There are also no plastic or glass cutouts for an antenna, something the current-generation iPod Touch -- which sports a similar aluminum-bodied design -- has next to its rear-facing camera.

We asked designer Federico Ciccarese to conduct some measurements based on the photos and he believes the iPhone in the images is 4.7 inches diagonally and 2.3 inches wide, the same width as the existing iPhone 5s.

A report from earlier today indicated the iPhone 6 may be thinner and lighter than the existing iPhone 5s, thanks to advancements in LED backlighting technology. The device in the images is indeed thinner, taking on a curved-edge design much like the existing iPod touch, the iPad mini, and the iPad Air.

The iPhone 6 may also include a sapphire glass display, which is both thin and durable. It is also believed that the iPhone 6 will be equipped with the Touch ID fingerprint authentication system first introduced with the iPhone 5s.

Even if these images are fake, they give a good idea of what a larger screened iPhone 6 could look like. More images below.

Update: A few readers have pointed out why they believe these images to be fake: repeating textures, wrong font, copied texture.

Lepton
We need to give these leakers some iPhones so they can take decent photos!
Score: 31 Votes (Like | Disagree)

pgiguere1
He should have used unique textures ;)

I want it to be true. I really do. But unless Apple is taking a few steps back in their typefaces, this isn't real.
Score: 20 Votes (Like | Disagree)

CrAkD
they look pretty damn good fake or not.
Score: 18 Votes (Like | Disagree)

RoastingPig
yesss! i will make my triumphant return to apple as my main driver with the 6...see ya later android nice knowing ya
Score: 16 Votes (Like | Disagree)
Read All Comments