Apple's quarterly earnings may be stagnant, but at least one division within the company is showing extraordinary growth. As noted by Asymco analyst Horace Dediu, Apple's iTunes/Software/Services division grew by 34 percent year-over-year after taking into account the 70% Apple pays to developers for App Store purchases.

Dediu estimates that Apple's gross revenues from the iTunes/Software/Services group are almost $7 billion per quarter, with a total of $23.5 billion for 2013. This includes growth categories such as third-party content (+46.6 percent), Services (+37 percent) and apps, which grew 105 percent year-over-year. This division is remarkable when compared to rival Google and other Fortune 500 companies. 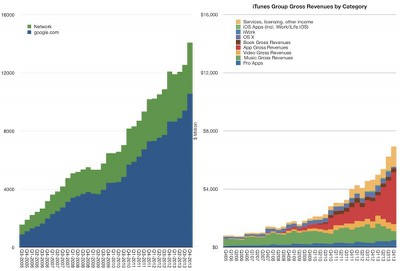 Although iTunes/Software/Services are not usually included in a “sum-of-the-parts” total contributing to Apple’s overall enterprise value, the scale of volume and value of transactions is becoming harder to ignore.

To illustrate this, I plotted the history of gross iTunes revenues vs. Google’s search business.

On a yearly basis iTunes/Software/Services is nearly half of Google’s core business and growing slightly faster.

The iTunes “empire” of content and services would be ranked as number 130 in the Fortune 500 ranking of companies (slightly below Alcoa and above Eli Lilly).

Despite reporting its highest revenue ever and its best quarterly sales for the iPhone, iPad and Mac, Apple is still under fire for not being a growth company. In a recent interview with The Wall Street Journal, Tim Cook argued that Apple is still growing, just at a slower rate, and said the company has significant opportunities in both existing and new product categories.

Sky Blue
Stick an App Store on the Apple TV and have it grow a little more ;)
Score: 9 Votes (Like | Disagree)

or is there simply less music worth listening to ?

I am finding I buy significantly less new music and play the stuff I already own more often.

...says every new generation ever as they grow older.
Score: 2 Votes (Like | Disagree)

Stick an App Store on the Apple TV and have it grow a little more ;)


Oh this is the dream isn't it. Can you imagine some of the things one might be able to do with an App Store for the Apple TV!!! :eek: :D

I know I have a lot of ideas for it and I am sure there are those that have a lot more vision than me. Come on Apple open this puppy up!
Score: 2 Votes (Like | Disagree)

What apps, other than the ones that come with AppleTV, would you like, that you can control with the remote? Other than media apps, there's not really much to add to the AppleTV, unless they change the input method. And I kinda like the "singular purpose" device that the Apple TV currently is, keeping everything simple.


I would like to see Apple TV have an app store that you can download games and connect a bluetooth controller to to play games this could be either a dedicated controller or an app on your iphone/ipod touch. The apple tv would only need to have the internals of an ipod touch less battery and screen so should be relatively cheap to manufacture. To be honest though this can be achieved using an iphone/ipod touch with an hdmi cable.
Score: 1 Votes (Like | Disagree)

What I found interesting was the significant decline in music revenue. Are listeners moving to streaming services rather than purchasing a track/album outright?


or is there simply less music worth listening to ?

I am finding I buy significantly less new music and play the stuff I already own more often.
Score: 1 Votes (Like | Disagree)

Harmonious Zen
I would love it if Tim Cook just said one day, "you know what? You're right - maybe we're NOT a growth company anymore. And maybe we don't even care if we are or not!"
Score: 1 Votes (Like | Disagree)
Read All Comments