Several concept images for the rumored "Healthbook" app that may be included with iOS 8 were today published on the MacRumors forums by member CarlosGQ. According to 9to5Mac, the site that shared the original Healthbook rumors, the app mockup "vaguely" resembles the actual app that Apple is working on and thus hints at what such an app might look like. 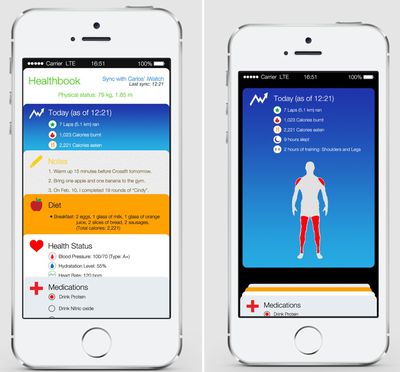 According to sources, the mockups are "vaguely" the right idea. Of course, Apple is likely testing multiple different user-interfaces for this software, and since we are several months out from an official introduction, things can and likely will change (even drastically)…

Healthbook, which is a health-related app reportedly in iOS 8, is said to pull in health-related data from several sources, including Apple's much-rumored sensor-laden iWatch and the iPhone itself. Healthbook may be able to manage and track weight loss and monitor and store fitness statistics like steps taken, calories burned, and miles walked.

Rumors suggest it can also monitor vital signs like blood pressure, hydration levels, and glucose levels, aggregating information to provide an overall picture of health. As pictured, the app is said to have a card-style design much like Passbook.

Along with commenting on the Healthbook mockups, 9to5Mac has reiterated some information on both the Healthbook app and the iWatch to refute a report from MobiHealthNews earlier this week that tempered some of the expectations surrounding Apple's iWatch.

While MobiHealthNews cast doubt on the iWatch's ability to sense glucose and hydration levels, 9to5Mac argues the device may indeed have those abilities as the Healthbook app is able to read glucose-related data and track hydration. It will not, however, track stress or women's health/pregnancy as previously reported.

Though many aspects of the iWatch and the Healthbook app remain unknown, iWatch rumors do generally agree the device will include several important health-related sensors able to track elements like sleep and exercise. As 9to5Mac points out, Apple has some significant hurdles to overcome with both hardware design and regulatory bodies, so it continues to be unclear what the final device and its accompanying app might include.

cclloyd
You're getting a 1 night stand hookup then Siri says "You should probably tell her about your STD"
Score: 26 Votes (Like | Disagree)

xNYMetsx
I hope this isn't the highlight of iOS 8.
Score: 23 Votes (Like | Disagree)

sfsurfer
Is anyone else confused or intrigued about this line in the Notes section?
Carlos certainly likes doing rounds on Cindy.....
Score: 15 Votes (Like | Disagree)

musika
Ugly mockup, great idea. I have high hopes for the final product.

I do hope they don't go with the Passbook-esque card interface though. I find it kind of confusing/unintuitive. We'll see.
Score: 10 Votes (Like | Disagree)

I understand this is useful and all, but if you really care, you can get one of the 100000 devices/apps that already do similar things.

I don't want 2014-2016 and iOS 8 to focus on something that the entire demographic isn't really interested in. I mean, reminder to take medications...really?


I'm 27, and find it to be extremely useful. I do care, and realize that there is not a single device on the market that does everything the iWatch is rumored to do.

I'm pretty sure I'm not the only one.
Score: 9 Votes (Like | Disagree)
Read All Comments