Apple today released the fifth beta of iOS 7.1 to registered developers for testing purposes, following the release of the fourth iOS 7.1 beta on January 20. The update has a build number of 11D5145e and is available via an over-the-air update and through Apple's developer center website. 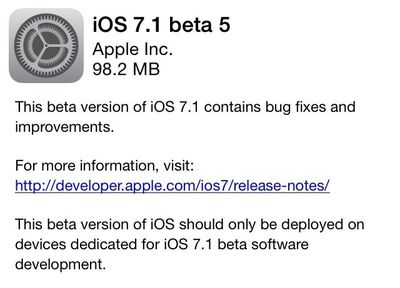 According to the release notes, iOS 7.1 beta 5 includes new natural-sounding Siri voices for English (Australia), English (United Kingdom), Japanese, and Chinese (Mandarin - China). It also notes that a compact version of Siri is bundled with the release for the new languages, but can be expanded to the more natural voice after install.

The iOS device initially uses a compact voice for Siri. After you have configured a Wi-Fi network and have the device connected to a power source, iOS will automatically download and install a higher quality version.

Earlier betas of iOS 7.1 have introduced a number of features, including "Button Shapes" in Accessibility, more prominence for Touch ID and Passcode options, a new look for several aspects of the Phone dialer and shutdown screen, a new animation for "Slide to Unlock" and a slightly revamped color for the Phone, FaceTime, and Messages app icons.

Details on features in past beta releases can be found in our previous beta posts: Beta 1, Beta 2, Beta 3, Beta 4.

Shift enabled to the left, shift disabled in middle, caps lock enabled to the right
Wallpaper options have also been tweaked slightly and the button to disable parallax is now called "Perspective Zoom" instead of "Motion."
Related Forum: iOS 7
[ 174 comments ]


Why can't they just make it that all the letters on the keybaord are lower case and when you click on the shift key they all show capitalized?
Score: 7 Votes (Like | Disagree)

aziatiklover
Still no quick reply! OSX mavericks got it already what are you waiting for :apple: :rolleyes:
Score: 6 Votes (Like | Disagree)

Because it won't look like a 'real' keyboard unless the letters are always upper case.

Which would be a valid argument had they not gone out of their way to decry skeuomorphism and its value when unveiling iOS 7.

In this case, there is a great deal of utility in breaking with tradition and orientation to physical objects.
Score: 5 Votes (Like | Disagree)

Why can't they just make it that all the letters on the keybaord are lower case and when you click on the shift key they all show capitalized?

Because it won't look like a 'real' keyboard unless the letters are always upper case.
Score: 5 Votes (Like | Disagree)

Why can't they just make it that all the letters on the keybaord are lower case and when you click on the shift key they all show capitalized?

Saturday February 4, 2023 1:30 am PST by Hartley Charlton
Google's Chromium developers are working on an experimental web browser for iOS that would break Apple's browser engine restrictions, The Register reports. The experimental browser, which is being actively pursued by developers, uses Google's Blink engine. Yet if Google attempted to release it on the App Store, it would not pass Apple's App Review process. Apple's App Store rules dictate...
Read Full Article • 233 comments