An Apple patent detailing pressure-sensitive touchscreens was published today by the United States Patent and Trademark Office, reports AppleInsider. Entitled "Gesture and touch input detection through force sensing," the application describes a system in which a traditional touchscreen is complemented by multiple force-sensors in order to better log unique gestures and more complex input. 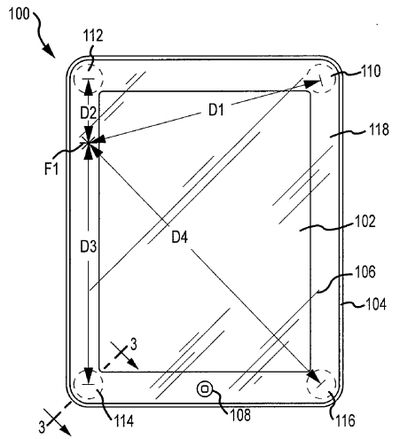 The patent application introduces itself by describing the problems with current touchscreens found in devices, noting that some gestures such as those involving a swipe or pinch from a screen's edge are not recognized properly, or result in unintended action. Apple suggests that by deploying three or more force sensors in a touchscreen, a device can determine specific central pressure points and take appropriate action.

The touch screen is configured to detect a touch signal corresponding to a user finger approaching or contacting the touch screen. The at least three pressure sensors are configured to detect a pressure signal corresponding to an object proving pressure on a surface. In response to the pressure signal the processor determines a centroid location relative to the surface and the touch signal is processed by the processor by analyzing the centroid location.

Apple also states that central points determined by force sensors can determine if one or more touches are accidental, which is slightly similar to the current palm rejection technology found on the iPad Air and iPad mini. The illustration above shows a user resting the right thumb on one side of an iPad's screen while continuing to use the tablet with the left thumb. Currently, this input combination cannot be performed on iOS devices, and would potentially allow for new interactions if enabled.

Furthermore, the patent notes that the force sensors can be positioned outside of an active touch region, which could allow for users to interact with user interface elements such as menu options that extend well beyond the immediate area of a touchscreen. This would allow a device the option to render more elements onscreen while retaining key touch elements needed offscreen, offering a secondary mode of input.

Currently, it is unknown whether Apple plans to create such a touchscreen for its products or not, but the company has shown an interest in pressure sensitive technology before. An Apple patent detailing the integration of a pressure sensitive button in a touchscreen was published last November, and a patent that described pressure-sensitive device casings was awarded to Apple in March 2013.

The patent application, which was originally filed on January 30, 2012 and published today, also lists Nima Parivar and Wayne C. Westerman as its inventors.

AngerDanger
Yet they're completely ignoring the portal technology shown by the left finger in the second picture? :confused:

Have any of these leaked patent applications from Apple EVER predicted a real upcoming product? I'm genuinely curious because these weird patents from Apple keep being posted by Macrumors and others but I can't remember a single instance where one of these strange product type patents predicted an actual future product. Does anyone else know?
Score: 3 Votes (Like | Disagree)

To me, this could also mean that they can do away with the bezel around the screen - which would be good!
Score: 3 Votes (Like | Disagree)

KieranDotW
For the digital art community, this is exciting news.
Score: 3 Votes (Like | Disagree)

Even though a home button is present on the device sketch, it wouldn't surprise me if this tech was used to remove the necessity of a home button.


Did the home button run over your childhood pet or something? I find it extremely useful.
Score: 2 Votes (Like | Disagree)

For the digital art community, this is exciting news.


An even more exciting one would be adding true Wacom support...
Score: 2 Votes (Like | Disagree)
Read All Comments