In honor of today's thirtieth anniversary of the introduction of the Macintosh, Apple CEO Tim Cook and executives Craig Federighi and Bud Tribble recently sat down for an interview with ABC News. ABC's David Muir was a guest on Good Morning America this morning, where he introduced a short preview of the interview, which airs in full tonight. 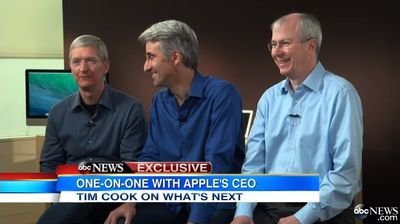 In the clip, Muir talked candidly to the trio of executives about Apple's culture of secrecy, the company's plans for its Arizona sapphire manufacturing plant and the iWatch. Cook was forthcoming in the interview about his work habits and Apple's rumored black curtains, but as usual he adeptly deflected questions about Apple's future product roadmap.

kalsta
Nothing gets the fans on my MBP excited like a good Flash video.
Score: 30 Votes (Like | Disagree)

ericinboston
There has been more Mac news on this website in the last 24 hours than the last 5 years of MacRumors. Seriously.
Score: 22 Votes (Like | Disagree)

scottsjack
Right there in the first picture you see some of what is wrong at Apple.

Apple could use some young innovative people. As much as I like Apple (just got another one this week!) the product line has become stale, restrictive and overly-conservative. Users keep loosing connectivity and the ability to upgrade. The product line is full of holes, just what you might expect from some old, grey-haired dudes.
Score: 9 Votes (Like | Disagree)

Right there in the first picture you see some of what is wrong at Apple.

Apple could use some young innovative people. As much as I like Apple (just got another one this week!) the product line has become stale, restrictive and overly-conservative. Users keep loosing connectivity and the ability to upgrade. The product line is full of holes, just what you might expect from some old, grey-haired dudes.


I would counter and say that's part of what's right at Apple. Steady leadership. They don't react to every new idea just because it's new. Sometimes slow and steady wins the race. I think Apples methodical approach has proven itself to be the right strategy. The results speak volumes. They change when they need to do so.

Also, I'm not in their HR Dept but I am pretty sure they have a crap ton of young innovative people working there. And about that... innovation doesn't have a chronological equivalency quotient.
Score: 7 Votes (Like | Disagree)

While this kind of retrospective and celebration is fun, it's very clear that this isn't Steve's Apple anymore.

I don't know. There is the compulsive attention to thinness. That's a Steve thing. There is the deprecating of "old" technology. Classic Steve. There's the release of a new OS with massively new innards, mostly unstable to end users and breaking work flow habits. Totally Steve.

Apple has adopted some of the aspects of Steve that annoy users in the name of changing the world around them.

Look at the iOS 7 update. Annoyed many users, but nonetheless is ubiquitous.

Apple is about the same. When you look at the slide show on Apple's site today it is interesting to me what Macs were used for. Not what I perceived, but all you have to do is look at 2001 and all of a sudden the internet is the make-it app for the platform.

I was using a IIci in a networked university to discover the internet in 1992. I think while I was discovering FTP and email someone came up with this thing called a browser. Useless! Nothing to see. Move along.

The little clip isn't loading for me. Ho hum! Will try my PC when I get in. 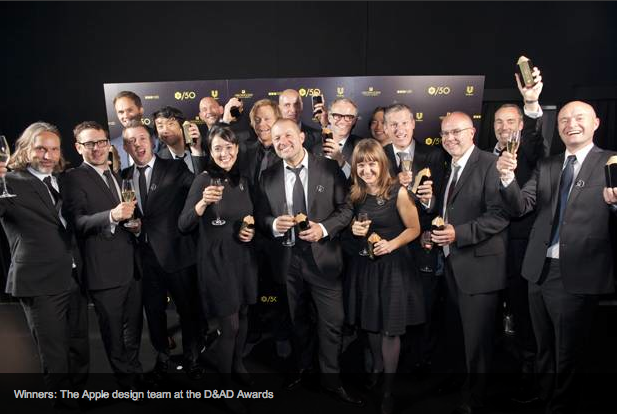