Apple's iBeacon technology based on the Bluetooth LE standard is being installed in Apple Stores and other retail outlets to assist customers and send them promotions while shopping, but as noted by Patently Apple, a newly published patent application suggests this technology could also be used to send secure mobile payments while making purchases. 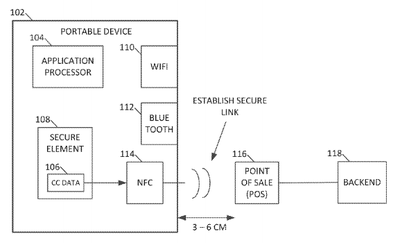 Patent application number 20140019367, filed in September 2012 and published today, describes a method that would send payment data through various wireless interfaces without compromising the user's data. The method uses two links -- one connection to a point-of-sale device to establish the initial connection and a second, secure connection that sends the payment information. This payment information is then processed by a backend server, which uses a shared secret to verify that the connection was secure before it authorizes the payment.

The payment method described in the patent may use NFC as well as Bluetooth and Wi-Fi to connect the mobile device to the point-of-sale terminal. Though iBeacon is not directly named in the patent, it is easy to see how the technology could be used as the conduit for the secure Bluetooth connection. Apple even notes in the patent that NFC "is less desirable for longer transactions," while Wi-Fi or Bluetooth has "more desirable characteristics for maintaining the link over time than NFC."

The use of Apple's iBeacon technology, rolled out alongside iOS 7, is expected to increase over the coming year as other retailers such as Macy's have begun piloting the Bluetooth LE technology. Most recently, the Consumer Electronics Association used iBeacons for a scavenger hunt at CES 2014, while Major League Baseball will be bringing the technology to stadiums.

In either case, I'm not sure I trust retailers to implement securely. :/

Starbucks, Neiman, Target, huge numbers of banks all flubbing up.

Hear that sound? Thats the death cry of NFC


On the phone maybe; here in UK you are no longer able to get a bank card from any major bank without NFC built in.
Score: 2 Votes (Like | Disagree)

This seems better than NFC implementation. Is that just me?

In either case, I'm not sure I trust retailers to implement securely. :/

On the phone maybe; here in UK you are no longer able to get a bank card from any major bank without NFC built in.


Yeah, you can get it on bank cards (although I've never had it on my Natwest ones), but how many shops use it?

Regarding iBeacon or Apple's theoretical proprietary payment system - unless it's made into a standard that anyone can use it's never going to be ubiquitous. Like with iMessage and Facetime - if Apple had made them open standards that anyone could use I would be able to get by with just them, but as it is I have to have Skype as well, and people nag me to get WhatsApp and Viver and other stuff with irritating names.
Score: 1 Votes (Like | Disagree)
Read All Comments