Earlier this year, Apple design chief Jony Ive and designer Marc Newson created a number of one-of-a-kind items to be sold at a Sotheby's charity auction to benefit Product (RED). Two items in particular were Apple related, a pair of solid gold Apple EarPods and a new Mac Pro with a special red finish.

According to a pair of tweets by photographer Kevin Abosch, Tony Fadell -- one of the creators of the iPod and the founder of Nest, the company behind the Nest Thermostat and Protect smoke detector -- may have purchased both the Mac Pro and the EarPods at the auction. 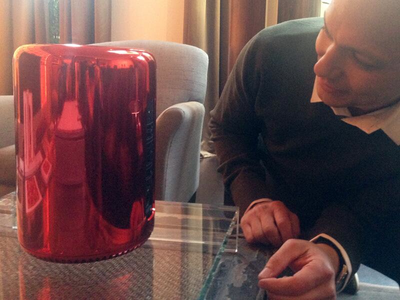 The red Mac Pro is one of the few out in the wild at the moment, as Apple has not yet started selling the device to the public. First shipments of the new Mac are expected later this month.

We have reached out to both Kevin Abosch and Tony Fadell for confirmation of the purchase and will update if we hear back.

Update: Fadell has issued a Tweet clarifying that he did not purchase either the Mac Pro or the EarPods.

To be clear, I'm not the owner of either. The real owner will reveal themselves if they so choose. @kevinabosch @tfadell with (RED) Mac Pro — Tony Fadell (@tfadell) December 13, 2013

Update 2: Abosch has now tweeted a picture of himself reflected in what appears to be the surface of the red Mac Pro, perhaps supporting the theory that he is the owner of the machine.

mclld
Spends 1.4 million on a computer and earphones yet cant use a decent camera to show it off??
Score: 33 Votes (Like | Disagree)

Spends 1.4 million on a computer and earphones yet cant use a decent camera to show it off??


They should've bought the Leica.
Score: 20 Votes (Like | Disagree)

wow, seeing that i wish they would do several colors in that amazing color chrome? look. it is really hot! like to see it in a blue too.


The aftermarket is gonna go wild with this. Personally I'd just take a clear shell-- the insides of the new Mac Pro are just beautiful.
Score: 14 Votes (Like | Disagree)

WaxedJacket
Pro has gotta be the coolest PC design in years. I really really want one.

Why are people making an issue with the price?

1) It's for CHARITY. Price should never be a factor in the end if it's for charity.

2) Solid gold ear pods. That would go well with the gold iPhones.


Because I've noticed people on this site are a tad bit mental.
Score: 10 Votes (Like | Disagree)

jm001
Why are people making an issue with the price?

1) It's for CHARITY. Price should never be a factor in the end if it's for charity.

2) Solid gold ear pods. That would go well with the gold iPhones.

willmtaylor
Money well spent for a great cause. Kudos.
Score: 8 Votes (Like | Disagree)
Read All Comments