Since March 2012, Apple's stunning Amsterdam store has been the company's only retail location in Netherlands, but that will change this Saturday, December 7 when the company's Haarlem store opens for business in the city's main shopping district. 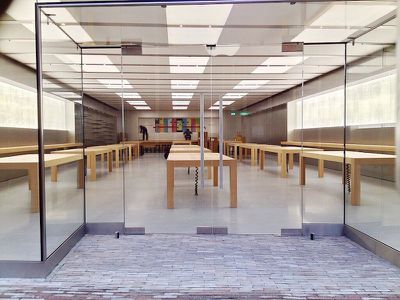 Haarlem retail store on December 1 (Source: @pbastowski)
The new store is only roughly 20 km from the existing Amsterdam store, leaving the rest of the country still poorly served by Apple retail stores. Apple is however working on a location in The Hague, with Apple having posted job listings for both the Haarlem and Hague locations back in April of this year.
Tag: Apple Store
28 comments

RoelJuun
Find it weird that they open a shop in Haarlem and not Utrecht, Utrecht is much more a student city and at the centre of the country.
Score: 5 Votes (Like | Disagree)

FactVsOpinion
Guys, it's very possible that although this will be the second store that opens Apple may have been looking simultaneously to opening stores in some of the locations you've mentioned. There is no fixed time line on these things if you're a company who is very picky on locations within cities. They may have their sights on a very particular neighborhood, mall, shopping district, or even building, and sometimes one deal happens faster than another. Maybe they're waiting for a particular lease to end.

Basically, just because a store opens second does not necessarily mean that Apple thinks it is the second most important place to have a store.
Score: 3 Votes (Like | Disagree)

With a country that's only 41k km², I feel these two stores could service the whole country with maybe one more further south.

Driving 30 minutes to service your Apple product isn't that outrageous.


Uhm... add two hours and your there...
Yes.. for some people its a 2,5 hour drive to Amsterdam.
Holland is not a circle with its capital (Amsterdam) in the center... :p
But luckily there are some APR's here and there, but Apple Store service and stocking is a lot better!
Score: 2 Votes (Like | Disagree)

BornAgainApple
It would appear Apple should have consulted the MR forum members first ;)

Davejprince
Haarlem, the worst city to place a second Apple Store in The Netherlands for real.
Rotterdam or Utrecht are much better locations for a new one, or even Groningen or Eindhoven.. but Haarlem, that close to Amsterdam: Really?;
Score: 2 Votes (Like | Disagree)

Haarlem isn't such an odd choice if you take into account that the city council is sponsoring Apple's second store and research shows that average income per resident in Haarlem is 20% higher than that of Utrecht en Rotterdam combined.


Exactly!
That's the real reason why it's located in Amsterdam and Haarlem in the first place.
And that's why they will never set it in other parts of the country like Utrecht in the first few years. Haarlem is definetly for sure the best place for this store. Especially with Santpoort, Bloemendaal, Heemstede and Aerdenhout next to it, why? Cause people with money.

Second, the city is relativly small and it has a nice old shopping area with Lot's of exclusive stores in old buildings.

The Hague would be my third choice. Den Bosch my fourth. Utrecht my last. Lot's of students without money...
Score: 1 Votes (Like | Disagree)
Read All Comments