Late yesterday, we posted a remarkable photo of the glass staircase inside Apple's new Amsterdam retail store that is set to open to the public on Saturday. Press previews of the new store took place this morning, and a number of sources have now posted photo sets of the interior of the store. 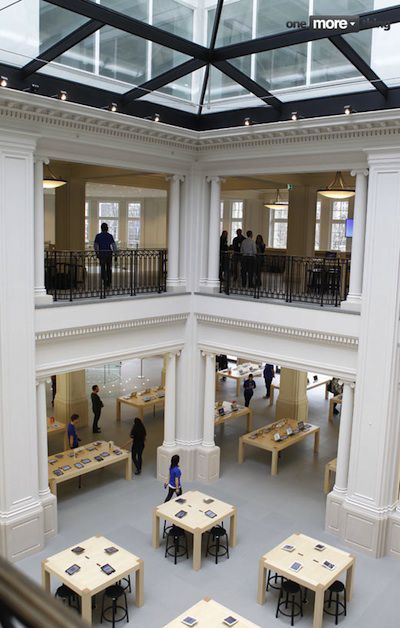 One More Thing has an extensive gallery [Google translation] showing off the rather ornate interior details Apple has utilized in the historic building.

Meanwhile, iPhoneclub.nl has some additional shots [Google translation], including one of the massive Genius Bar that Apple reportedly says is the longest in its chain of retail stores. The Genius Bar had been reported to offer 20 seats for customers, but the photo certainly appears to show significantly more stools than that.

The new store, Apple's first in the Netherlands, opens to the public at 10:00 AM on Saturday. With Apple having updated its Apple Store app for iOS devices yesterday to add support for the Netherlands, customers at the Amsterdam store will be able to utilize the company's EasyPay self-checkout option from the very first day.

ThatsMeRight
This store looks awesome! And look at the details... wow.
Score: 5 Votes (Like | Disagree)

Why do they insist it is the first in the Netherlands? It is not.


It is! You have stores like ''Xando'' in Enschede or Amstelveen. But those are Apple premium resellers. This is the first OFFICIAL Apple store, from Apple itself.
Score: 4 Votes (Like | Disagree)

Lovely place for a smoke and a pancake with your Fazher.
Score: 4 Votes (Like | Disagree)

Why do they insist it is the first in the Netherlands? It is not.


Yes, it is the first official Apple Store. You are confusing this with the already existing Apple Premium Resellers in The Netherlands such as YouMac, A-Mac or iCentre.

Sorry mushrooms have since been banned. But i do find it funny you can smoke in a bar as long as its 100% weed. That tabacco is really bad for you. Anyway back on subject...


The official stance of the Dutch government is that 3 or maybe 4 species of magic mushrooms are illegal to sell.
However, you can still obtain a smaller type of mushroom or various types of truffles. Hell, if you know what you're doing (but I figure the average smoke&drink tourist doens't) you can even go into the fields and find some yourself.

I live relatively close to Amsterdam, but in my opinion Apple picked the worst location ever. The only customers who benefit from this location, are the ones who live within short walking or bicycle distance. You can't get there by car without paying huge parking fees or getting a wheel clamp. Public transfer is slow (no subway). And only if the local soccer "fans" haven't destroyed the neighborhood again.

Apple should have picked one of the more geographically centered cities. All have way better connections by train and car than Amsterdam.


Where would you have placed it? Utrecht? If you're from the south of The Netherlands even that is far by your standards.

Amsterdam is the logical choice for Apple. It's the centre of The Netherlands' urban area. The greater Amsterdam area inhabits about 2 million people.
Besides that, Amsterdam receives the most tourists on a yearly basis.

And as for public transport, there are 5 trams and I believe 5 busses who all stop on the Leidseplein (the square) so it is in fact quite easy to reach.
Other then that, it's maybe a 15 minute walk from the Dam Square.

So boohoo, Amsterdam, and Holland for that matter, are tiny.
It's just that Dutch people think travelling 30 minutes for something they like is too long, be that a museum, football match or in this case, an Apple Store.

And just like in any major city, you have to make an effort. Do you think the average New Yorker is pissed off because he can't park on 5th Avenue?

Please, have some common sense.

Besides, it is not a necessity. You can go to any APR and get the same products, you can even order them online.
The Apple Store is more of convenience, free internet, free hotspot.

It's just great for Apple, and Amsterdam's, global appeal.

Rant over.
Score: 3 Votes (Like | Disagree)
Read All Comments