Apple has been awarded a patent by the U.S. Patent and Trademark Office (via AppleInsider) for a system that allows for a personal computing device such as a Mac or iPhone to be controlled through facial detection and recognition, primarily for security and convenience purposes.

The patent, which was filed back in 2008, introduces itself by describing the problem with the interaction between users and current electronics, stating that devices such as computers inconvenience the user by requiring action in order to continue operating without interruption, along with detailing the security hazard that comes with the inability of passwords to detect a truly authorized user. 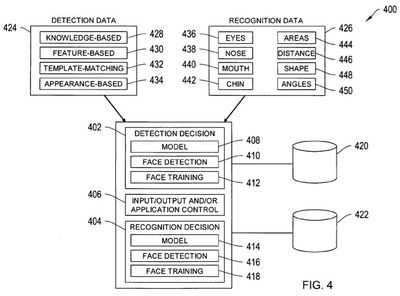 An incoming phone call is cited as an example scenario that could benefit from a facial recognition and detection system, with the system keeping the screen off and only giving off a ringtone or vibration alert if a user is not authorized compared to displaying a normal call screen for an authorized user. The same principle is applied to an incoming email, where a message can be hidden if an unauthorized user is detected.

The patent also details a number of examples as to what information the facial detection and recognition system cites in authorizing users, with information such as visual facial features and background being matched up against stored information to determine whether control of a device can be accessed or not.

It is unknown exactly how or even whether Apple plans to utilize this technology in its products, but competitors such as Samsung and Google have already touted simple facial recognition as key features in their products. Apple also recently completed its acquisition of 3D body sensing firm PrimeSense, and while the system detailed in the patent differs from the firm's image sensing technology, both could be used as part of a bigger initiative by Apple to better integrate human recognition into its products.

This is also not the first time evidence of Apple's interest in face recognition has surfaced, with other patent applications addressing similar concepts while the company acquired Swedish face recognition firm Polar Rose back in 2010.

Alumeenium
You're late on your taxes, iPhone will remained locked :eek:
Score: 8 Votes (Like | Disagree)

8281
Soooo...facial recognition research, but we still can't run two apps at the same time on an iPad.
Score: 6 Votes (Like | Disagree)

tuxon86
Well, now the NSA will have confirmation of who is really using the device they are spying on for sure...
Score: 5 Votes (Like | Disagree)

chaosbunny
I hope this feature needs to permanently connect to Apples Servers to work and will offer a direct upload to the NSA or else it wouldn't make sense.
Score: 5 Votes (Like | Disagree)

Hello NSA? They will know what you look like..lol.

A 2D face sensor can easily be defeated with a printed picture of the authorized face.

Doing this in 3D would be interesting (then you need a very convincing mask or something to fool it...), but that's not what was patented here. Interesting the patent took so long (and was granted! It's so obvious / unoriginal / so many people have already done it, what on earth is there left to patent?)


The face unlock on Android can be setup to require a blink and/or a voice and thus printed pictures are defeated.
Score: 4 Votes (Like | Disagree)
Read All Comments