Thursday December 29, 2011 9:13 am PST by Arnold Kim
Back when the iPad was still just a rumor, the Wall Street Journal reported that one of the features that Apple had been working on with their upcoming tablet was the ability to recognize users by face.

One person familiar with the matter said Apple has put significant resources into designing and programming the device so that it is intuitive to share. This person said Apple has experimented with the ability to leave virtual sticky notes on the device and for the gadget to automatically recognize individuals via a built-in camera. It is unclear whether these features will be included at launch.

The effort was part of Apple's efforts to make their new tablet a multi-user device. Facial recognition, however, never made it into the iPad, but a newly published patent application gives us insight into this feature that didn't make it into the shipping product. 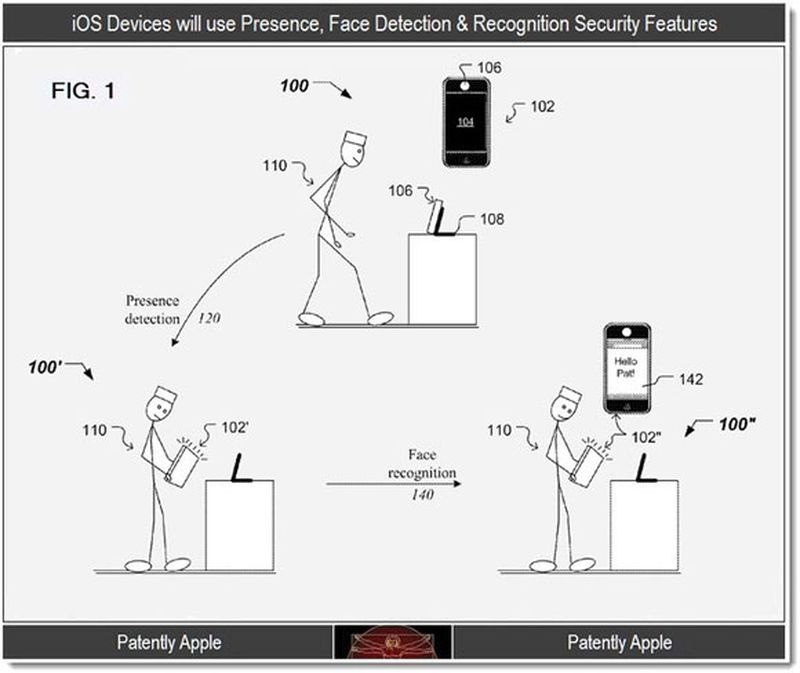 AppleInsider notes that the new patent application offers a way for multiple users to share a device:

The filing provides a simple way for multiple users to share a single device, like an iPad. Each user could customize their personal profile with unique wallpaper, applications and settings, and that profile would be immediately accessed once the iPad recognizes a user's face.

The face detection system reportedly could be a low-power system that is always active, allowing face detection to be the primary method to unlock your iOS device. Apple's patent was filed in June, 2010, soon after the first iPad was introduced.

Face recognition as a security measure, however, has some possible flaws. Google's Android recently introduced a Face Unlock feature as well, but reports have suggested it can be fooled by a photograph of the user.

Hey Samsung, did you get that?


Already on the Samsung nexus as standard. Can see a patent feud blowing up! Not like apple!
Rating: 7 Votes

I apologize for raining on your parade, but somebody needs to tell you that Android 4 already has face recognition for authentication built in. It's just ANOTHER feature that Apple "borrows" from Android.

Hey Samsung, did you get that?

Pared
What some of you fail to realize is that the use of this feature is to allow multiple user accounts on the device that are recognized solely by facial recognition.

This is taking what many claim that Android had "first" and using it in a more practical sense than a tech demo.

Either way, I'm sure they're aware of the flaw in Android's implementation and would make sure this isn't a possible workaround.
Rating: 5 Votes

Shabach!
There's An App For That!

I apologize for raining on your parade, but somebody needs to tell you that Android 4 already has face recognition for authentication built in. It's just ANOTHER feature that Apple "borrows" from Android.


Well....There is actually an app for facial recognition in the Nokia Store and has been available for several months for my N8 and other Symbian devices, so the facial recognition aspect of unlocking a device is nothing new, as Android may have you believe.

Just because other manufacturers want to build this functionality into the OS is really just a natural evolution; and it seems that Apple's implementation goes far beyond the basic implementation that is on ICS.
Rating: 5 Votes

kdarling
Multi-user is NOT what this patent appication is about

I actually may have thought of this before Apple. Why didn't I patent it!


Probably because everyone on the planet has thought of using facial recognition for multi-user login, and/or has already done it before.

Which is why this patent is NOT about multi-user :) ... it's just given as an example use.

THIS PATENT APPLICATION IS ABOUT USING ORANGE SKIN TONES TO HELP WITH A LOW POWER RECOGNITION SYSTEM.

(Along with optionally checking eye and mouth positions and trying to reject photos.)

Hmm. I wonder if the orange range might present a problem:

Google's Android recently introduced a Face Unlock feature as well, but reports have suggested it can be fooled by a photograph of the user.

And this is why they need to license my new patent, Buttock Recognition.

Unless you're a flasher, or one of those guys who likes photocopying his butt at Christmas parties, it's a lot safer. Although admittedly, it's largely security by obscurity...
Rating: 4 Votes

BJMRamage
Crazy but Cool idea for sure.

Imagine letting your child pick it up and all the settings/apps changed for him/her.
you grab it and all your apps are on the front most screen.

downside to Apple is selling less devices per family. Upside...maybe a hesitant family would purchase one...then seeing it caught over, just buy multiple ones.

and Using multiple iPads could mean picking up any iPad and it works for you or a family member that is "subscribed" to the Family iTunes log in.
Rating: 4 Votes

centauratlas
A multi-user function on the iPad would be nice - you may want to let your kids use the iPad, but not (for example) get into your email.

Whether it is facial recognition or not, something would be nice to have.
Rating: 4 Votes

Yeah, no one is really reacting to the core of the patent - I guess because the concept of multi-user facial recog is more gossip worthy. :o


Yes, that's definitely more interesting. Plus it's often easier to talk about made-up issues than to take the time to understand the facts :)

This is actually not a very useful patent in comparison to using other methods. Why waste energy on a camera and processing images, when you could just use a proximity sensor to start things up?

To me, the real importance of this application is that it speaks to the idea of always-on recognition, not just when you hit a button. Imagine if this were built into a magic bathroom mirror that recognizes you each morning.

For all you who think android had this face recognition first they didn't. Apple did. It say clearly in the article that they patent this idea June of 2010. Android just came out with a crapper version in October of 2011.


As I have pointed out a couple of times above, this patent application is about scanning for skin tones (to notice when someone is in front of the device), not about the far more basic idea of user recognition.
Rating: 3 Votes