Last week, a report from Japanese business newspaper Nikkei shed light on the production issues surrounding the forthcoming Retina iPad mini, stating that Apple is now turning to rival Samsung as suppliers Sharp and LG Display have failed to produce an ample supply of displays for the new tablet. Now, a report from Korean website ETNews (via Unwired View) has elaborated on the matter, with Sharp's IGZO panels for the Retina iPad mini said to be suffering from screen burn-in issues.

While the burn-in issue is reportedly invisible to users, the panels do not meet Apple's specifications and thus the high rejection rate has resulted in low panel yields for the tablet. As noted in a report earlier this week analyzing the new iPad Air's use of IGZO technology, Sharp has experienced difficulties ramping up production of its IGZO panels in the past, with it taking until now for Apple to bring the technology to its products. 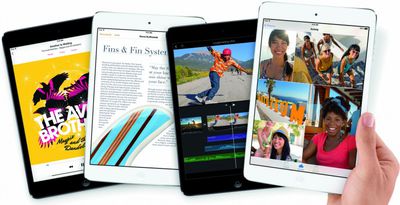 The burn-in problem was caused by the drastic reduction of the pixel size. The resolution of the 7.9-inch iPad mini with Retina display is 2048×1536, about four times clearer than the existing 1024×768 products. LG Display used the amorphous silicon (a-Si) for the substrate, whereas Sharp used IGZO. The pixel of the smartphone display is smaller than that of the iPad mini Retina panel, but as the Low Temperature Polycrystalline Silicon (LTPS) technology is used, it can be produced stably. The pixel of the iPad mini Retina is the smallest among those products using a-Si. Sharp failed to solve the chronic problem of IGZO, i.e. uniformity, and its yield went down.

The report also elaborates on how Apple may be negotiating with Samsung to produce displays for the device starting next year, turning back to its rival in part due to Samsung's experience solving a similar problem with third-generation iPad's move to a Retina display.

If the issue of screen burn-in persists, the report also states that Apple may move to LTPS technology such as that seen in the Kindle Fire HDX, as it is less prone to the problem. However, while LTPS is commonly used on displays for smaller devices such as the iPhone, Apple is unlikely to mass produce the displays for larger screens in part due to scalability issues that simply won't support the tens of millions of tablets that the company is producing each year.

Apple CEO Tim Cook stated last week during the company's fourth quarter earnings call that it was "unclear whether we will have enough for the quarter or not," as the company has only promised that the tablet will arrive by the the end of November. As noted by Apple during the introduction of the second-generation iPad mini, a Retina display has been one of the most requested features for the smaller iPad since its release last year.

Update: MacRumors spoke with Ray Soneira of DisplayMate Technologies, who noted that LG is almost certainly not using a-Si for its Retina iPad mini display panels due to significant power issues with trying to drive a display of that pixel density using the technology. The company has also been shipping its own IGZO display panels for some time now, and Soneira pointed out that "it would be very inefficient to engineer the iPad mini to ship using two significantly different display technologies."

Soneira also clarified that "burn-in" is the incorrect term for what would be happening with these LCDs. It would be a short-term image retention issue perhaps similar to what some early Retina MacBook Pro users experienced, although it appears in this case that the effect is invisible to users.

Razeus
I got a feeling I'm going to need to stay away from this one and wait for Mini Retina 2.
Score: 35 Votes (Like | Disagree)

Santabean2000
Samsung to the rescue... Apple's best worst friend. Or worst best friend? However you cut the cake, Samsung have some technical know-how; anything you can do, we can copy it better!
Score: 17 Votes (Like | Disagree)

Exactly, but not only that, Apple's standards aren't being met (as the article clearly states), which means that those problems with the screens do *not* even make it to the device (they are being rejected, a la the "high rejection rate" stated in the article!), but that doesn't seem to satisfy all the chicken littles around here declaring the sky is indeed falling because a pea fell on the other side of the world.


Take a look back at iPad 3 screen issues and even the new iPad Air screen issues (because the Air uses the new technology).....even Apple is letting some issues through. I'm guessing that a screen has to be REALLY bad to be rejected, otherwise it makes it.

Don't for a minute think Apple is all high and mighty and only releases the best of the best....they are like any other company and are trying to pump out as many "acceptable" devices as possible.

caspersoong
If the burn-in is invisible to users, why is it a problem?
Score: 11 Votes (Like | Disagree)
Read All Comments