IHS Suppli has released its estimate of the component costs involved in building the new iPad Air, performing a virtual teardown based on information revealed by Apple and industry knowledge. According to IHS estimates, the component cost of the iPad Air is between $274 and $361 depending on the model, with the base model's components actually totaling $42 less than that of the entry-level third generation iPad last year despite significant technology improvements to reduce size and weight while improving performance. IHS iSuppli did not perform a cost analysis on the fourth-generation iPad, which was released in late 2012.

The estimates from IHS iSuppli cover only the cost of the various components that make up the device and do not include other costs involved in product development, manufacturing, and sales, such as research and development, software, patent licenses, marketing, and distribution expenditures. The full report has not yet been released but AllThingsD received early access. 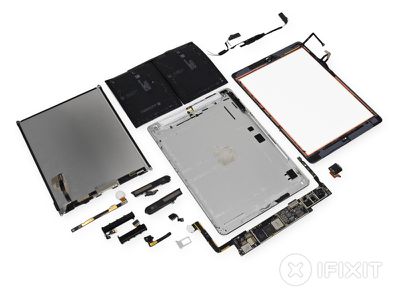 The bill of materials includes $90 for the display, $43 for the touchscreen components, $18 for the A7 chip manufactured by Samsung, between $9 and $60 for the Toshiba-made flash memory chips, $10 for the DRAM chips manufactured by Elpida, and $32 for the cellular data network chips made by Qualcomm for the LTE-ready versions of the iPad Air.

With the iPad Air, Apple appears to have reached a new milestone on the wireless front: It can support every LTE frequency with a single combination of chips. “This is something Apple tried to do with the iPhone 5S and 5C, but it couldn’t quite get there,” Rassweiler says. “One single model of the iPad Air is able to work with all US wireless carriers.”

IHS iSuppli reported last month that iPhone 5s component costs were estimated to begin at $199, with the cheaper iPhone 5c's costs estimated to be starting at $173. The iPad Air was released last Friday with adoption rates reportedly outpacing last year's iPad 4 and iPad mini launches, although Apple has yet to release official sales numbers for the device's opening weekend.

The full IHS Suppli report should be released tomorrow.

macduke
It's pretty ridiculous that Apple still charges $500 for the 16GB base model. Should be at least 32GB.

I'm not surprised that the thing is cheaper. The 3rd gen was pushing the limits on what you could do at the time with a giant battery and brand-new display tech. The iPad Air has many of the same components: 5MP camera, same screen resolution, same amount of RAM, same storage capacities. It's probably a big reason why they could make the Retina Mini for $100 less. The Air helps subsidize it.
Score: 39 Votes (Like | Disagree)

It costs about 5 cents in materials to make a 2-liter. They sell it for between $1 and $2.

Then they should reduce the price by 13%.

In the end they would still earn more anyways!

Time for apple to show some good-will after everything they have put us through the last 24 months.


Oh yeah exactly, just like they are still charging for OS X and iWork, even for customers that have the previous versions of these. They never show any goodwill and give anything for free for customer appreciation. :rolleyes:
Score: 18 Votes (Like | Disagree)

appleguy123
Apple could have doubled the space and still kept higher margins than last time.

HenryDJP
That's almost $300 without the labor of building it. My colleague in the first post thinks it's pretty ridiculous of Apple to charge so much for the 16GB but at already close to $300 without labor, R&D and advertising what do you expect Apple to do to make a profit? Would I love for it to be cheaper? Surely, but at the end of the day it's business and you don't have to buy, just remember that.
Score: 15 Votes (Like | Disagree)
Read All Comments