Graphics Cards in New Mac Pro May Be User Replaceable

It may be technically possible for buyers of the new Mac Pro to replace their graphics cards, according to a report from the French site Mac4Ever. [Google Translate]

The site claims the GPU on the Mac Pro is placed on an independent daughter card with a proprietary connection, which would make sense as it would make warranty-repairs of broken GPUs significantly easier. There is no indication if or when third-party graphics cards could be released for the new Mac Pro, but the new device is scheduled for release in December of this year.

According to our information, it is possible to change the graphics card in this machine. In fact, the GPU is placed on a daughter card, it is possible to remove and thus replace. As you might expect, Apple uses a proprietary connector (as is the case for SSD array present on the rest of the range). But nothing prevents, on paper, a manufacturer decides to offer compatible models on the market

A similar system is used in the MacBook Air's SSD flash storage. In 2010, Other World Computing released aftermarket SSD upgrades for the MacBook Air, allowing larger SSD options than Apple's 256GB maximum -- for a significant price. The MacBook Air uses a proprietary SSD connector and board, but OWC was able to design replacement storage options for the computer. 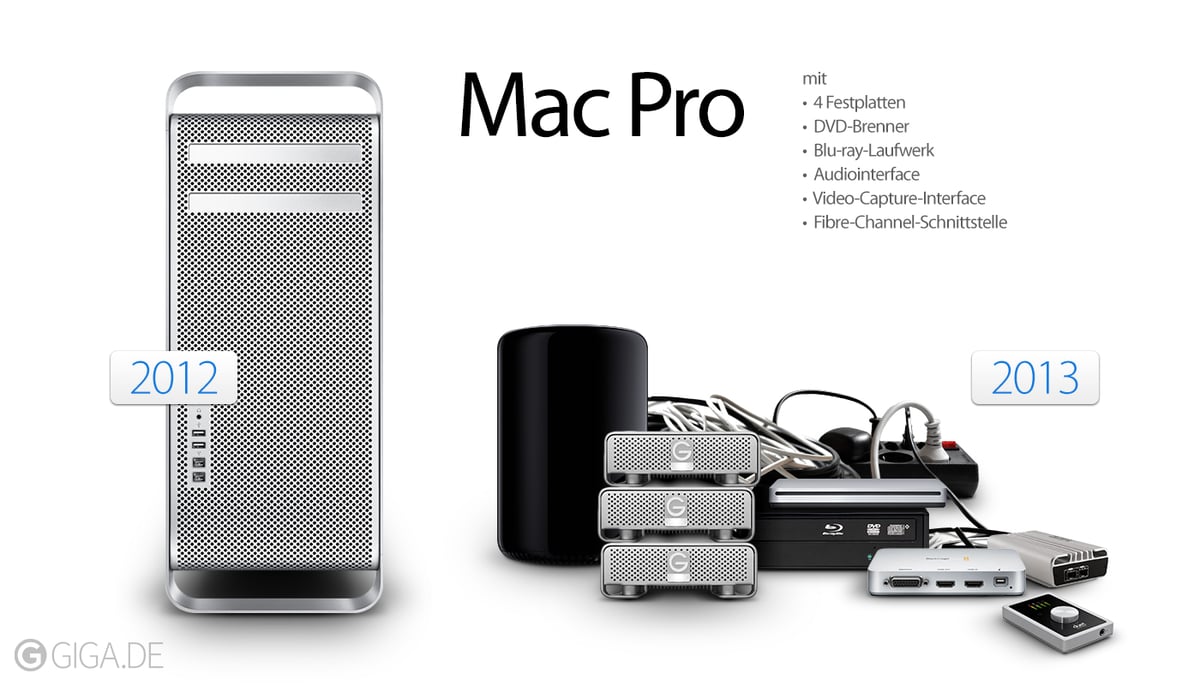 ryansimmons323
OWC are probably rubbing their hands together...
Score: 15 Votes (Like | Disagree)

i understand why they want to shut down non-pro machines, or even the macbook 'pro' for that matter

but a workstation 'tower' that's locked down?? doesnt make any sense to me
Score: 13 Votes (Like | Disagree)


Yeah, the last Pro was the same, but how long did it take for a 3rd party to release an "updated" graphics card....? So what if it's replaceable if it takes 4 years to get a new card for the Pro that was out 3 years ago for a PC??
Score: 12 Votes (Like | Disagree)


One person sees a bunch of stuff they don't get.

Another sees a bunch of stuff they don't want.

Less is not always less. And more is sometimes less.
Score: 8 Votes (Like | Disagree)


THANK YOU FOR MAKING ME SPIT MY DRINK OUT! LMAO

Now I can't stop hiccuping. That was my first criticism of the new Mac Pro and people here laughed at me!

You pointed out what I meant months ago in a great picture.
ThunderBolt is fantastic, but I don't want to have to buy a new computer table for all the devices I have to add to this machine to make it comparable to my old Mac Pro which can be upgraded with various graphics cards and SSD drives internally in one piece.

How can a PRO machine NOT have internal user expansion?

I predict different people will buy the new Mac Pro than the previous Mac Pro.
But I will admit, the new Mac Pro would make for a small wicked fast tricked out gamers machine, but I don't think at that price it will fly.

I predict prices on Ebay for the last generation Mac Pros will escalate after the new one is released because you can get multiple faster graphics cards for those Pros in many ways, even outside of Apple.
Score: 6 Votes (Like | Disagree)
Read All Comments