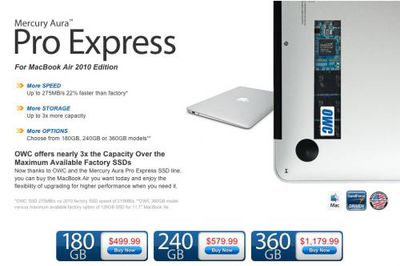 Other World Computing (OWC) last week announced the debut of its new Mercury Aura Pro Express solid state drives for Apple's latest 11-inch and 13-inch MacBook Air models. The new drives, which offer greater speed and capacity than Apple's factory options, are available in 180 GB, 240 GB, and 360 GB capacities. Based on a SandForce controller, the drives also feature a number of other technologies to enhance speed, performance, and data integrity.

Taiwanese firm PhotoFast had previously announced similar SandForce-based SSDs ranging up to 256 GB that would be compatible with the 11-inch MacBook Air, but Apple quickly moved to halt sales of the drives. It is unclear if Apple is objecting to the new offerings from OWC and/or applying pressure to have them removed from sale.