Siri "Eyes Free" mode will be coming to the 2014 Chevrolet Camaro, Volt, Malibu, SS, Cruze and Equinox via the Chevrolet MyLink service, GM announced today. Earlier this year, the Chevy Spark and Sonic were the first cars to get Siri "Eyes Free" mode, and the car company cites its popularity with customers for its expansion across their car line.

"The response to Siri Eyes Free integration in Chevy Sonic and Spark from our customers has been remarkable," said Chris Perry, Chevrolet vice president of U.S. Marketing. “Easy, reliable and portable connectivity is a top priority for our customers, and Siri complements MyLink's existing capabilities to help deliver an incredible driving experience, so we're excited to expand this to even more customers." 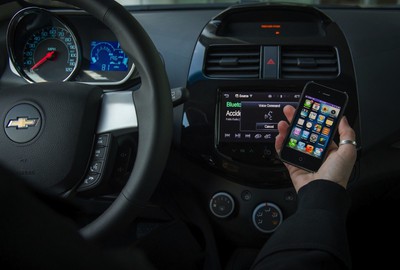 In June, BMW announced Siri "Eyes Free" mode, which allows users to interact with their devices without looking at their phones, would be arriving in all of its cars from 2014 and beyond while Honda had announced the feature would be coming to several of its 2013 models earlier this year.

Apple has made an effort recently to get its technology in automobiles with Siri "Eyes Free" being announced last June and iOS in the Car, which allows iOS devices to be seamlessly integrated into cars' in-dash entertainment systems, being announced at this year's WWDC. At their third-quarter earnings call in July, Apple CEO Tim Cook said that having something in the automobile was "very important" for Apple.

Revearti
My next car will have some sort of Apple / iOS integration.
Score: 2 Votes (Like | Disagree)

kdarling
I often wish my big navigation touch screen could echo and input to my phone's display.

Display and interactive integration with ALL types of smartphones should've happened years ago.

Car makers should sit down and hammer out a global spec.
Score: 1 Votes (Like | Disagree)

Nevaborn
Again iOS in the car is what I want, but not just on new expensive cars. I want Apple to release its own if need be or open up to allow 3rd parties to develop kits to retrofit iOS in the car to current vehicles.
Score: 1 Votes (Like | Disagree)

makingdots
Where's our "iOS in the Car" ?
Score: 1 Votes (Like | Disagree)

oopl
This isn't that big of a deal. I think most everyone is waiting on news of iOS in the car.
Score: 1 Votes (Like | Disagree)
Read All Comments

Friday July 10, 2020 11:12 am PDT by Juli Clover
Apple this month published a support document that warns customers against closing their Mac notebooks with a cover over the camera as it can lead to display damage. Image via Reddit Apple says that the clearance between the display and the keyboard is designed to very tight tolerances, which can be problematic. Covering the camera can also cause issues with automatic brightness and True Tone....
Read Full Article • 324 comments

Friday July 10, 2020 2:58 am PDT by Tim Hardwick
At last month's WWDC, Apple officially announced that its Mac computers will be transitioned from Intel x86 to homegrown Apple Silicon chips. Apple said it plans to deliver the first Apple Silicon Mac by the end of the year and complete the transition in about two years. According to Apple analyst Ming-Chi Kuo, a 13.3-inch MacBook Pro with a form factor similar to the current 13.3-inch...
Read Full Article • 178 comments

Saturday July 11, 2020 1:42 pm PDT by Arnold Kim
Casual MacRumors visitors may not realize that we have a very active PowerPC forum where users discuss issues related to PowerPC Macs that have not been produced since 2006. Threads range from hardware upgrades and software options to nostalgia: Photo by AphoticD Apple's recently announced transition to Apple Silicon (Arm) based Macs raised some interesting questions about future support...
Read Full Article • 86 comments

Friday July 10, 2020 3:33 am PDT by Tim Hardwick
Apple TV+ today debuted "Greyhound," the highly anticipated Second World War movie starring Tom Hanks as a naval officer given command of Navy destroyer Greyhound in the Battle of the Atlantic. "Greyhound" features Hanks as George Krause, who must fight his own self doubts and personal demons as he leads a convoy of Allied ships against German U-boats to prove that he belongs in command. ...
Read Full Article • 62 comments

Friday July 10, 2020 12:01 pm PDT by Juli Clover
Apple CEO Tim Cook was the second highest paid CEO in the United States in 2019, according to Bloomberg's list of the highest paid CEOs and executives in 2019. Cook received compensation totaling $133,727,869 by Bloomberg's count. Almost all of Cook's compensation was provided in the form of stock awards and related performance bonuses. As reported by the SEC earlier this year, Cook received ...
Read Full Article • 112 comments