In line with its previous announcement, Virgin Mobile USA began sales of the iPhone 5s and iPhone 5c yesterday, with the prepaid Sprint brand offering a $100 discount from normal unsubsidized pricing. 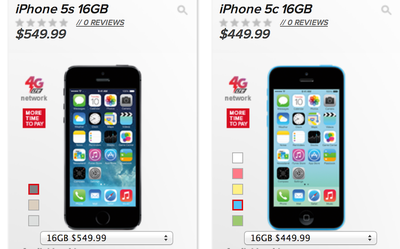 Supplies appear to be somewhat limited at launch, with the yellow 16 GB iPhone 5c and all 32 GB iPhone 5c models with the exception of blue listed as out of stock. As for the iPhone 5s, all three gold variants and the silver 16 GB model are also unavailable. Interestingly, the 16 GB iPhone 5 remains available for $549, $100 more than the iPhone 5c, suggesting that pricing on the new models could be temporary.

Virgin Mobile first started carrying the iPhone in June 2012 with both the iPhone 4 and iPhone 4s. It did not start selling the iPhone 5 until this June, nine months after the former flagship phone debuted on major U.S. carriers.

In the UK Virgin can't even get round to offering a nano-sim!

Wolfpup
These are such awesome deals. If you've got good Sprint coverage where you use your phone, this is a no brainer. I *used* to, but weirdly Sprint's like 1 bar now while AT&T which until a few months ago barely got 1 bar of GSM is now 4ish bars of HSPA+. It's like the swapped (heck, for all I know they did in my area lol).

It's CDMA only. So what exactly is the point of paying full price?

1) It's not full price, it's discounted $100. That's the cheapest you're going to get it with any carrier, and is an amazing deal, particularly considering they've got them basically at launch.

2) Saying "what's the point if it's locked" which is what I assume you're saying...well what's the point of any cell phone then? In the U.S., most phones are locked. Verizon's isn't only because of a deal with the government (thank goodness), and T-Mobile's isn't because they're operating in a more European-like model now. But it's hardly new for a phone to be locked.

pauliaK, they're locked, but sometimes phones AREN'T locked for use abroad, or other weird things like that. I don't know if that applies here.

The Sprint iPhone is actually the best model, if not for it being locked. It'll work virtually anywhere in the world. It includes all the bands that the other model sold on Verizon/AT&T/T-Mobile have plus more. If nothing else this should let it dial 911 on any carrier in the U.S.!
Score: 2 Votes (Like | Disagree)

It's CDMA only. So what exactly is the point of paying full price?

iPhone 5s on Virgin Mobile does not work on other carriers/networks overseas. It works on Sprint's Nationwide Network.

It's CDMA only. So what exactly is the point of paying full price?
Score: 2 Votes (Like | Disagree)

wongulous
I have Sprint and it's fine. Why bother posting to dog on it just because it isn't great in your area? Get a service that is great. It's wireless, it isn't going to be perfect everywhere.

Anyway, does anyone know if one could purchase this and then put it on their Sprint account? I'm under contract and looking at buying unsubsidized (full retail), and this would save $100 due to the discount currently.
Score: 1 Votes (Like | Disagree)

On the Sprint network? FORGET IT.


If you've got good coverage from Sprint where you are, this is an awesome deal. Save $100 on the phone, and save thousands on the plan.

It's a consideration that they're not unlocked, but shouldn't be an automatic deal breaker.
Score: 1 Votes (Like | Disagree)
Read All Comments