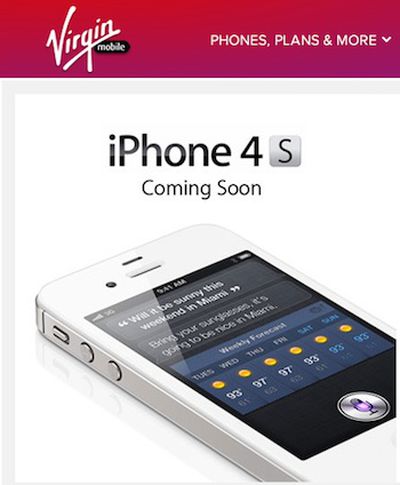 Notably, Virgin Mobile will be offering service plans for as low as $30 per month with no commitment when customers sign up for automatic payments.

Virgin Mobile's Beyond Talk unlimited data and messaging plans for iPhone start at $35 per month for access to Sprint's Nationwide Network, and customers can receive a $5 per-month plan discount when they register for automatic monthly payments with a credit card, debit card or PayPal account, making iPhone available for as low as $30 per month. Customers can also use their iPhone as a mobile hotspot through Virgin Mobile for an additional $15 per month.

Unlike Cricket, which announced last week that it will begin offering the iPhone on a prepaid basis on June 22, Virgin is not offering any subsidy on iPhone hardware, with the 8 GB iPhone 4 being priced at $549 and the 16 GB iPhone 4S coming in a $649.

Cricket is offering the iPhone for $150 less, but its service plan consists solely of a $55/month offering with unlimited talk, text, and data. With Virgin Mobile offering plans for as low as $30, low-use customers can make up that hardware price differential in six months of service.

Virgin Mobile will offer the iPhone through its website and at RadioShack, Best Buy, and other select retailers.

wow, i wish sprint had decent service around where i live....

Why would anyone do that? Because some people can actually do basic arithmetic (as in elementary school).

Straight Talk service is bare bones, but they are using AT&T's cellular towers. They don't tell you who you called, who sent you texts, how much data you've used, and you can't block numbers. But if you want HSPA+ speeds, they are a cheap dumb pipe.

If you opt for Straight Talk over a comparable plan from AT&T or Verizon, your break-even point is month six. If you were on AT&T or Verizon and wanted to walk away from the carrier at that point, you'd have to shell out an additional $260 or so in early termination costs.

People who can't do math are throwing hundreds of dollars away each year to the big carriers. AT&T stock dividend yields 8%. Thanks for putting money into my pocket, guys! You are partially paying for my Straight Talk cellular service!

Worse, if you have a postpaid plan, you are almost certainly paying a bunch of taxes that are added to the rates quoted by the carrier. The prepaid Straight Talk plan has a few mandated FCC charges, but no local sales tax. So someone using a postpaid AT&T/Verizon plan as quoted above is likely paying an additional $8-10 more in taxes than their next door neighbor on Straight Talk.

I can't do pricing analyses for every household's situation, but clearly, if you care about your money, you might spend a few minutes doing your own analysis to see if you can save hundreds a year.

I will point out that in most countries, people buy handsets at full retail prices and pay much less for monthly service (which is not locked to a long-term contract). Only the United States and a handful of other countries have popular subsidized/long-term contract cellular sales model. The rest of the world is smarter than that.
Score: 26 Votes (Like | Disagree)

ristlin
Finally a competitor who brings something new to the table.
Score: 13 Votes (Like | Disagree)

Im guessing 90% of people who would buy a prepaid i phone dont qualify for a contract iPhone, most likely they wouldn't qualify for financing.


Sorry, but in 2012 going prepaid doesn't equate to bad credit like it used to. I think it equates more to wanting to pay less and not wanting to be roped into a 2-yr contract where a carrier has you by the balls.

There is no prestige in being tied into a contract where you're getting bent over by your service provider. Sadly, it is the people with your frame of mind that allow the major mobile companies to do just that.
Score: 12 Votes (Like | Disagree)

btcutter
not sure I would buy a FULL price iPhone and have it locked to VM. :mad:

If it's locked then it should be subsidized.
Score: 9 Votes (Like | Disagree)

Im guessing 90% of people who would buy a prepaid i phone dont qualify for a contract iPhone, most likely they wouldn't qualify for financing.


Why is there this notion going around that you have to be poor to be on pre-paid? I could afford any carrier, but I have VM, as they not only are the cheapest, but auctally provide more. Why would anyone want to waste money on post paid? From what I have seen, in many cases, people would still save over AT&T or Verizon over 2 years, even if they outright bought this for $650.
Score: 8 Votes (Like | Disagree)
Read All Comments