Friday September 27, 2013 8:47 am PDT by Eric Slivka
Earlier this week, we noted that a number of regional carriers in the United States and Canada had begun announcing plans to begin selling the iPhone 5s and iPhone 5c on October 1, representing a coordinated expansion of availability for the device even as iPhone 5s supplies remain extremely tight.

One notable exception to the list of carriers launching the new iPhones on that date was Virgin Mobile, but in a pair of Tweets issued today the company has announced that it too will be part of that October 1 rollout. 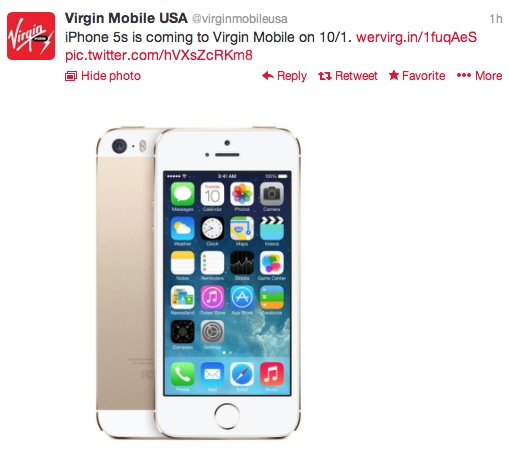 Virgin Mobile, a prepaid brand from Sprint, first began carrying the iPhone in June 2012 with the iPhone 4s and iPhone 4. The carrier did not begin selling the iPhone 5 until June of this year, some nine months after the handset debuted on the major U.S. carriers.

dpace32
Their plans are amazing... $30 a month for their Beyond Talk plan (http://www.virginmobileusa.com/cell-phone-plans/beyond-talk-plans/overview/) for an iPhone user to get unlimited data, unlimited text and 300 minutes.
Rating: 2 Votes

Cannot imagine how you can possibly be so lucky. For a phone that can do nothing but only used with one specific wireless provider with a <0.1% market share, it's impossible to hit a desirable buyer with just one post.


It's not entirely out of the realm of possibility. I too have sold prepaid phones (Blackberry Curve, LG Optimus V, HTC ONE V) that are tied to prepaid.

Yes, it's a small market share, but in a city of 2.7 million people and a MSA population of 9.7 million, you definitely get bites on Craigslist.
Rating: 1 Votes

acctman
Apple still has pre-order as late as November, yet they can ship stock to Virgin and other smaller carriers? I know companies like Virgin pay up front but what about the customers that already said 'hey Apple you can take my money' via a pre-order? :confused:
Rating: 1 Votes

Virgin Mobile's only concern is that poor people keep paying their bills on time and that new poor people use their service. I don't think current poor people that are VM customers can afford new phones.


I think we've found the elitist comment of the day. #

I think Virgin Mobile has a smart business plan; you end up saving more money in the long run compared to the other post paid services.

I'll let you in on a secret, no matter rich or poor, people will always want to save money.
Rating: 1 Votes

macguy360
Heres the deal and Sprint has confirmed it.

Think of spectrum like lanes on a tollway. You can buy an ez tag for ATT, Verizon or Sprint.

Sprint sells the cheapest ez tag but their tollway only has 2 lanes each direction and tons of poor people driving on it because they can't afford the more expensive ez tag.

Now think of Virgin Mobile and Boost mobile like an additional ez tag restriction forcing those customers to use only 1 lane of the 2 lane tollway.

In addition to being jampacked on that single lane, Sprint customers get priority for data throughput which essentially means someone throws a yield sign up on that tollway to allow Sprint customers to use both lanes while making boost mobile and virgin mobile customers wait (i.e. go slower)

Meanwhile ATT and Verizon customers are driving corvettes and ferraris down their 8 lane tollways with not a speed limit sign in site.
Rating: 1 Votes

I used Android on Virgin Mobile USA for a few years. great prices, but network speeds are dreadfully slow, unless you happen to be in one of their 4G covered areas.


We've got really good Sprint coverage in Chicago. My GSM iPhone 4 was a hand-me-down, so I migrated away from my HTC One V on Virgin Mobile to AT&T. Before my switch, I never had a single hiccup. My wife's still on it and gets 3G speeds at what is expected. I don't have any experience with 4G yet.


EDIT: If Virgin offered the 5S for as competitive of a price as they did for the 5 (as mentioned above) I would probably migrate back over from GoPhone to VM. This is relevant to my interests.
Rating: 1 Votes

Fairly certain they're still locked tight just like any other Sprint device. And they wont accept unlocked devices brought to their service.

I have Virgin Mobile and love it, but the unsubsidized cost of an iPhone isn't worth it compared to other VM alternatives. I got my current phone, the HTC One V, on sale for $50 around Christmas. What a steal to replace my LG Optimus V.

I think you need to be in the alternative section
Rating: 1 Votes