Back in June soon after Apple offered a sneak peek at the new Mac Pro, a Geekbench result from the new machine appeared revealing some performance information about the machine under its internal product code name of AAPLJ90,1. That machine was running a 12-core Intel Xeon E5-2697 v2 at 2.7 GHz, representing what would be a high-end model of the machine.

Today, a new Geekbench result that appears to be a second legitimate Mac Pro has appeared, this time running a lower-end 8-core Intel Xeon E5-1680 v2 chip at 3.0 GHz. As with the previous Mac Pro seen on Geekbench, this new machine is running a custom internal build of OS X Mavericks, in this case Build 13A3010. 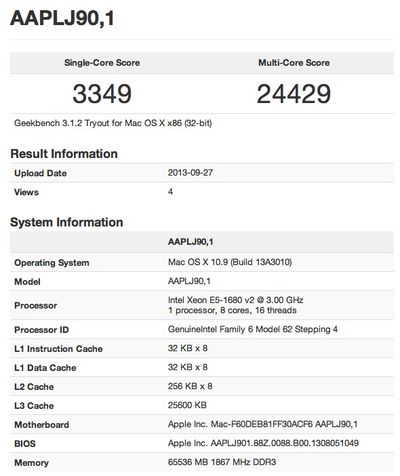 On the 32-bit Multi-Core Geekbench 3 scoring, this new 8-core Mac Pro registers a score of 24429, on par with scores achieved by the higehst-end 2010 and 2012 Mac Pro models running dual 6-core processors for a total of 12 cores. The new Mac Pro also handily beats the Geekbench performance of earlier 8-core models.

Apple's new Mac Pro is scheduled for release this fall, but the company has yet to announced detailed specifications, pricing, or an exact release date.

The Samurai
But does it come with a grater and in different colours?

That'll be the killer deal.
Score: 22 Votes (Like | Disagree)

my render farm's servers run 1.5 TB of ram each, this thing looks like a joke


That's great, but this is a workstation.
Score: 17 Votes (Like | Disagree)

Whenever I saw a silver Mac Pro (or the older yet similarly designed G5 Power Mac) it usually had a bunch of devices attached to it...
Score: 14 Votes (Like | Disagree)

Ill stick to xbox one, ps4 and iMac for gaming. Until Apple finally starts working companies to have games optimized for OSX


It's painfully obvious they didn't position this machine for gaming. :rolleyes:
Score: 10 Votes (Like | Disagree)
Read All Comments