Wednesday June 19, 2013 6:56 pm PDT by Eric Slivka
While Apple offered a sneak peek at its dramatically redesigned Mac Pro at its Worldwide Developers Conference, the new machine is not scheduled to launch until "later this year" and the company has yet to reveal detailed specs and pricing information.

But if a new Geekbench result is authentic, it appears that the new machine is already starting to show up in public benchmarking databases. Rather than showing up as a "MacPro6,1" as would be expected for Apple's next-generation Mac Pro, the new machine is dubbed "AAPLJ90,1", perhaps a reference to a J90 code name following Apple's usual format.

Also supporting the authenticity of the entry is the listing of a custom build of OS X Mavericks, 13A2054, running on the machine. The listed motherboard ID is also one which was discovered in OS X Mavericks as corresponding to the new Mac Pro.

The machine in question is running a single 12-core processor from the upcoming Ivy Bridge-E family, specifically the Xeon E5-2697 v2 running at 2.7 GHz. It is also equipped with 64 GB of RAM.

A comparison of this new Mac Pro entry with Apple's current high-end 12-core Mac Pro running a pair of 3.06 GHz Westmere processors reveals improved performance on Geekbench benchmarks by most measures, ranging from slight improvements for certain tasks to substantial improvements for others. 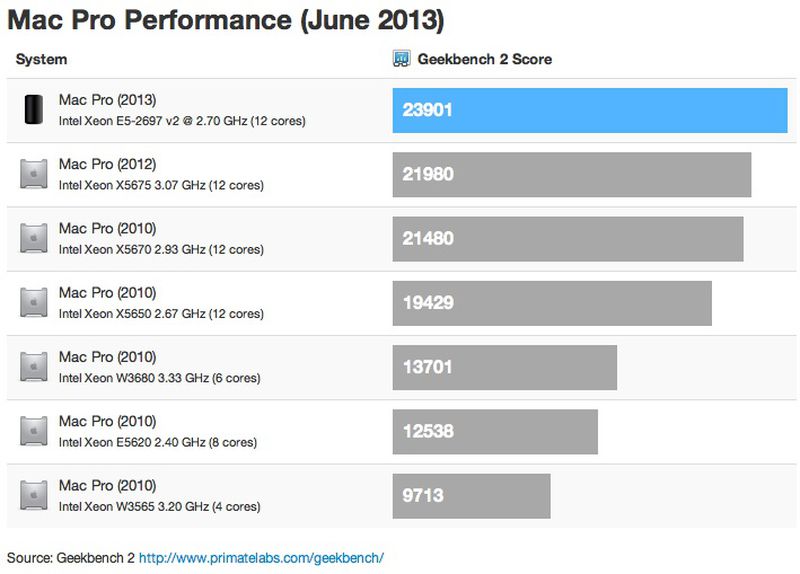 We chatted with John Poole of Primate Labs, who highlighted the substantial improvements in many single-core measures and in memory performance, suggesting that lower multi-core scores later in the Integer Performance testing run could be indicative of thermal issues.

Poole notes that with a public launch of the new Mac Pro likely still many months away, it is entirely possible that Apple is still ironing out both software and hardware issues on the new Mac Pro and that the company's work could lead to even more substantial performance gains once those issues are addressed.

Update: Poole has now shared some of his thoughts on the Mac Pro result in a blog post.

...Apple's claim of "up to 2x faster" floating point performance may be optimistic. The new "Ivy Bridge" Xeon processor in the new Mac Pro has instructions that can process twice the amount of data as the "Westmere" Xeon processors in the current Mac Pro. The problem is that only certain kinds of software can take advantage of these instructions.

strausd
I was expecting overall geekbench scores to be much higher...
Rating: 52 Votes

clamnectar
Here's what's up -- lack of significant advancements in CPU technology is a real restriction. There just isn't much to do other than add more cores, and all those cores are hot, which then comes at the expense of clock speed. It's a tricky balance.

In light of that, Apple's decided that the big leap forward in the new generation of Mac Pros will come from the GPU side. Geekbench is a CPU-only test, so you're not seeing the important part. The important part is that on a GPU test it would obliterate any out of the box mac ever, probably by an order of magnitude. From here on out, it's all eggs in the GPU basket.

If the software creators don't take advantage of the dual workstation GPUs, it won't do anyone any good. If they do, then it'll make this new Mac Pro wipe the floor with the old model in real world use (not Geekbench).

Of course, you can always add GPUs to the old model. But it's the change in philosophy that I'm commenting on.
Rating: 49 Votes

Oh... and one more thing. You'll no longer be able to upgrade any of the internal components when Intel or AMD upgrade their processors.

THIS IS COMING FROM A MAC PRO WHICH IS 1/8 IN SIZE OF THE CURRENT MAC PRO!


How many people asked for faster and more expandable, and how many asked for smaller and more proprietary?
Rating: 21 Votes

Michaelgtrusa
This will be a beast.
Rating: 18 Votes

First of all, it's tiresome having to read all the stupid comments like the guys that said "Apple fails again" and how unimpressive the geekbench score is. I say this because we don't really know what the score of a production machine will be. Secondly, when you run Geekbench in the free mode it only runs in 32 bit mode. 64 bit scores are typically 10% higher. I have tested many machines in both modes and can assure this is the case. That would put the score around 26300 which is impressive. It may come in around thirty on an actual production machine. Many of the excessively high scores on geekbench are from over clocked machines. Geekbench gives a lot of precedence to high megahertz. The Pro Machines are mostly aimed at FinalCut, Motion, and Adobe users. When compressing many videos in compressor and setting it up to use all the cores, the pro machine will outpace the over clocked Core i7 and remain reliable and stable.

I expect the new machines to be very solid work horse machines. A for the price, they will probably fall into the basic price slots that Apple has had for years, with the entry level Mac Pro being 2500.00, as you go up you get faster processor, more memory, and more storage.

Be a bit more reserved until you have all the facts you knee jerk reaction guys!
Rating: 14 Votes

EDIT: Unless I'm not understanding something correctly?
Rating: 14 Votes