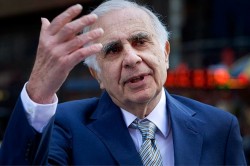 Activist investor Carl Icahn, who recently purchased around $1-2 billion in Apple stock, has a date for his meeting with Apple CEO Tim Cook to discuss the company's stock buyback plans and other issues, according to CNBC. The two will reportedly meet in New York City next Monday, September 30.

Activist investor Carl Icahn will meet with Apple CEO Tim Cook in New York City next week, where the billionaire may discuss the company's prospects, and the possibility of adding to his sizable stake in the technology giant.

Apple announced a stock dividend and buyback program in March 2012 as part of an effort to boost shareholder return as the company's cash and investment holdings have rapidly grown in recent years. Apple increased and accelerated the stock buyback program earlier this year, issuing debt to take advantage of a drop in the company's stock price.

Icahn believes that Apple should accelerate its buyback plans even further, arguing that it is a prudent move given the company's financial position and his belief that the company's stock remains undervalued.

Technarchy
This Icahn guy seems like a pain in the ass.

everything-i
This guy is a parasite, he wants Apple to accelerate the buyback for one reason only, it increases the value of his holding. He doesn't give a damn about the long term or Apple as a company, all he cares about is his own wallet.
Rating: 10 Votes

This is all very bad news for Apple.

His involvement implies the beginning of the end for any company, including Apple. Just take a look at what happened with Dell.

I just don't understand Tim Cook at all.

Apple went from the industry leader to a company unable to innovate. It can't even get over its fixation on iPhone's tiny screen size.

And it went from a company that lets its stock price speak for itself, to having to rely on someone such as Icahn to cheerlead its stock. How pathetic is this?

And what is all this talk of paying out dividend? The fact that the payment of dividend is already being done now and that there are more talks of higher dividend payout by Apple is extremely, extremely, worrisome.

Put it another way, if Apple is still the innovative and growth driven company like it used to be under Jobs, it would surely not payout any dividend -- no shareholders would want it to pay dividend -- because by keeping the cash within Apple and have Apple use the cash to generate returns, the shareholders are able to ensure that there is more returns that way -- since there are no other ways to generate a higher return than Apple.

By shifting to a dividend paying company, Apple is in fact admitting that it no longer has the ability to innovate and grow like it did before, and is thus not able to use the cash to generate a higher return as compared to giving the cash back to the shareholders and have the shareholders themselves generate a return.

Again, this is all very bad news.

The sooner Tim Cook is gone, the better.

He is the worst thing to have happened to Apple. We are in danger of a redux of the disaster that happened at Apple after Jobs was first ousted.

If nothing is done to reverse this, I think Apple would become like Microsoft or Dell and become irrelevant in a couple of years time like BlackBerry.


How droll, but I doubt this is intentional satire.

If you equate a bigger screen with innovation, I doubt you've ever endeavored to be innovative.
Rating: 8 Votes

This needs nipping in the bud now before he starts expecting Apple to bend its business around his interests.


Icahn is a stockholder, and like all stockholders he is legally a partial owner of the company. Stockholders in the aggregate are Tim's boss. Insofar as Icahn's interests are in line with other stockholder's interests, such as wanting for Apple to pay out their unused mountain of cash, Apple should be listening to him very carefully, and doing the best they can for their owners.
Rating: 7 Votes

Before people start circlejerking saying how it's the end of Apple as we know it, etc...

Carl Iahn is a huge investor, yes, but his net worth is NOT capable of taking over Apple. He might as well be a homeless beggar compared to Apple's value.


You're correct. However he still has the ability to spread influence with other high investors, and could be a problem for Apple if they start meeting his demands. This needs nipping in the bud now before he starts expecting Apple to bend its business around his interests.
Rating: 7 Votes

c0LdFire
Before people start circlejerking saying how it's the end of Apple as we know it, etc...

Carl Icahn is a huge investor, yes, but his net worth is NOT capable of taking over Apple. He might as well be a homeless beggar compared to Apple's value.

What he's doing (attempting to manipulate the value of his own investment) is still wrong and should be highly illegal, but it's not really going to actually effect Apple as a company.
Rating: 7 Votes

Icahn is a stockholder, and like all stockholders he is legally a partial owner of the company. Stockholders in the aggregate are Tim's boss. Insofar as Icahn's interests are in line with other stockholder's interests, such as wanting for Apple to pay out their unused mountain of cash, Apple should be listening to him very carefully, and doing the best they can for their owners.


Icahn is a "guerrilla" investor who attacks companies with easy money when no other investors have asked him to. He makes his money off crazy demands then flips his stock to move on to another victim.

The best thing Tim could do would be toss him off a tall building... Icahn is exactly what's wrong with Wall Street attacking healthy companies simply to shake out cash in 1-2 quarters then pull out their stake and let the company and all the other investors they "represented" crash. There's no money in companies that JUST make big bags of money in profits... That's not what Wall Street has done since the 1980's.
Rating: 6 Votes

Apple is not undervalued. $700 was a scam. $300-$350 is the correct price for their stock. Anything higher is a bubble that will burst. Apple has yet to prove that they won't have the same outcome of Nokia or Blackberry since phones are half their business.


A bubble based on what? Trailing P/E? Future P/E? Future EPS? Certainly you have some figures to back up your opinion that AAPL at $487 is a bubble waiting to burst. Can you somehow spin that 9 million iPhones sold as being a sign of the bubble bursting? Or that Apple revised it's guidance up, and we know they always beat their own guidance?
Rating: 6 Votes

they should have limits on how much stock you can buy...
Of course he wants a fast return on his investment, that is how he makes money, get stock before items release then sell said stock after big iPhone announcement and make money


This guy wants to make money on his investment? The horror!!
Rating: 6 Votes

Merkie
I think this is weird. This guy keeps having regular meetings with Tim Cook. What sets him apart from other shareholders (except that he owns probably a lot more shares than anyone)? This has a smell of insider trading to me. Or am I alone in this :confused: ?

I own 4 shares of Apple but I don't think I can just pop in and schedule a meeting.
Rating: 6 Votes