Apple May Be Working With Quanta Computer on Larger iPad

Apple is continuing development of its rumored larger-sized iPad and working with supplier Quanta Computer, reports Chinese site United Daily News (via Mac Otakara) [Google Translation]. The report from United Daily News refers to the larger tablet as a 12-inch device, but rumors from The Wall Street Journal suggest that Apple is actually testing an iPad that is closer to 13-inches diagonally.

News of a larger-sized iPad first surfaced in May, and was later confirmed in July. Such a tablet could be similar in size to Apple's 13-inch MacBook Air, as seen in renderings commissioned by MacRumors. 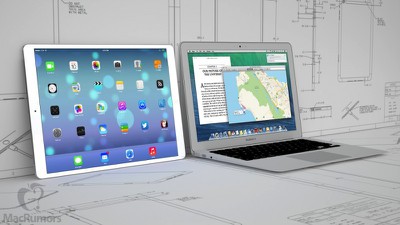 Click to see a larger version of the image.
Quanta Computer is an Apple supplier responsible for Apple’s current MacBook Airs and an unusual choice for tablet production as those devices are currently produced by suppliers like Foxconn and Pegatron. The report claims, however, that Quanta is aiming to diversify.

Though an original report on the larger iPad suggested that it could launch early next year, there is no indication that such a timeframe is correct and it remains unclear if the device will make it to market at all.

FFArchitect
Reminds me a bit of: 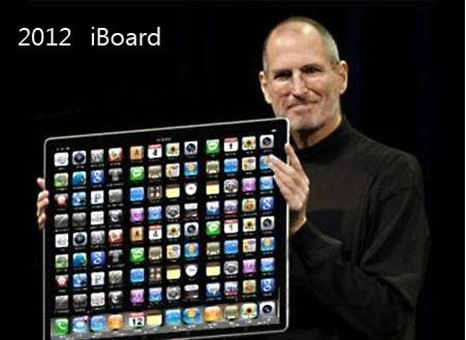 Zaqfalcon
Air with touchscreen would be better.
Score: 21 Votes (Like | Disagree)

AngerDanger
It'll probably be foldable, reguardless of whether or not it's Apple's intention. ;)

Bibbler
You guys who are suggesting OS X on a tablet don't get it.

A tablet (or any post PC device) and a PC are indeed 2 different animals with 2 different purposes. This is probably the #1 reason why the Surface is failing. Here's a good article that goes into a little detail on the subject:

This is where Microsoft made (and continues to make) it's mistake. Ballmer said that "Slates" were simply a computer in a different form factor. I don't believe that is true. A good tablet (or smartphone for that matter) should be simple to use. The OS should be simple and transparent to the user, and allow the user to pick it up for the 1st time and run the applications that they want to use.

I will always want a nice big Mac with a 24" + monitor, with lots of RAM, a big solid state drive, and MS Office Suite, Primavera and MS Project Management Software, Photoshop, Final Cut Pro, a good editor and a compiler loaded. But I suspect I am a small part of the overall population (who will always want a full blown computer in addition to other devices) , a part that is shrinking everyday.

MS (and Steve Ballmer in particular) absolutely doesn't "get it". They are trying to build a full blown computer into a tablet - with a desktop operating system and desktop applications. They don't understand the market, and if they don't get a grasp on it the day will come when they only own a very small sliver of the OS market and become just another maker of good application software...

Anyone suggesting OS X on a tablet is making the same mistake..
Score: 11 Votes (Like | Disagree)
Read All Comments

Friday May 7, 2021 2:07 pm PDT by Juli Clover
Amazon today announced that it is teaming up with Tile to add Amazon Sidewalk integration to Tile's Bluetooth trackers. Amazon Sidewalk, for those unfamiliar, is a network of Amazon Bluetooth devices that's designed to improve the connectivity of devices like the Ring and Amazon Echo. Tile will now be joining Amazon Sidewalk, and through this integration, Amazon Echo and Ring devices will be ...
Read Full Article • 153 comments