Monday September 23, 2013 6:25 pm PDT by Juli Clover
The Apple TV 6.0 update that Apple pulled over the weekend is now once again available for download. As noted by 9to5Mac, the updated version carries a build number of 11A502, compared to the old 11A470e version, indicating Apple has made some changes to the software.

Following the software’s initial Friday release, there were multiple reports that the update caused critical errors for a number of users, necessitating a full iTunes restore. The newly updated software presumably fixes those issues. 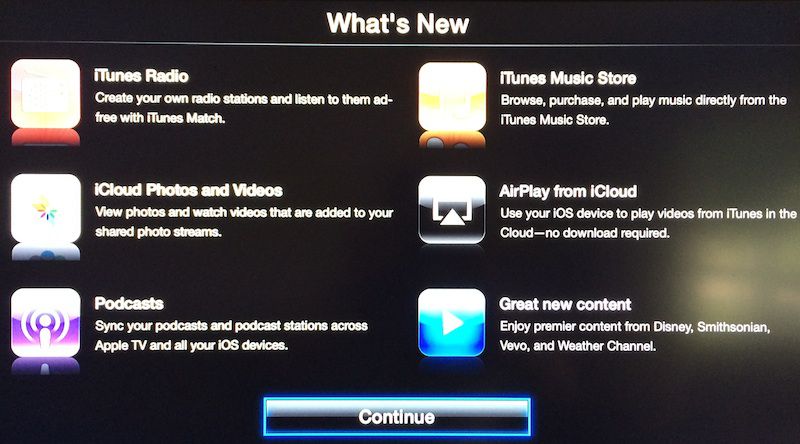 The Apple TV's 6.0 software offers a number of new features, including iTunes Radio, iTunes Music Store purchases, iCloud Photo updates, Podcasts, and AirPlay from iCloud. It can be downloaded from via the Update Software tool in the Apple TV settings menu.


Yes, you have to hold your TV with both hands and tilt it side to side. It's magical :p
Rating: 16 Votes

I wonder if this will come in for those of us who were successful in getting Friday's update to install.

Off I go to turn it on and find out.


You dodged the bullet once - why not wait a day or two to find out if this build is OK?
Rating: 8 Votes


Wow, what a caring and helpful response to a problem that was not at all my fault. My memory of living in Northwest Indiana was that everyone was so friendly and hospitable. Maybe you are just from Gary ;)
Rating: 4 Votes

After spending the weekend with a bricked ATV (since iTunes on my PPC iMac was evidently not good enough for a restore) I took it to work today and restored it with the windows PC. As a Mac user of nearly 30 years this was definitely NOT good advertising for Apple that in the presence of my coworkers I had to resort to the dark side to fix Apple's blunder.

Now I apparently get to spend even more of my time re-entering all of my settings :(

What exactly is icloud airplay?


I think it allows you to AirPlay your songs from your device onto an ATV that belongs to somebody else.
Rating: 3 Votes

What exactly is icloud airplay?


The new AirPlay over iCloud functionality allows users to take any purchased iTunes content  such as music, movies or TV episodes  and stream it directly to an Apple TV that may not be configured with their iTunes login credentials. The authentication is instead provided wirelessly by a connected iOS device, like an iPhone or iPad.
Rating: 3 Votes

bob122989
Will be waiting to update software until I see the all clear next time. The new features weren't worth losing the appleTV all weekend.
Rating: 3 Votes