Thursday September 19, 2013 9:45 am PDT by Jordan Golson
Apple has unveiled a new Kids category on the App Store [Direct Link], MacStories noted. The page includes multiple sections, including the best apps for certain ages, games specifically for kids, and different types of learning apps like 'Create & Play' and 'Shapes & Colors'. 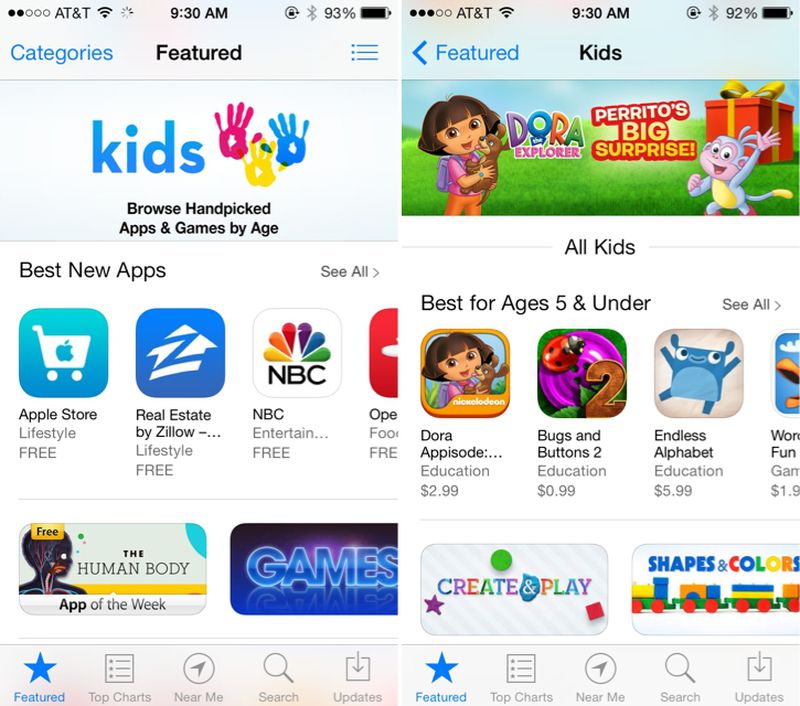 First announced at WWDC in June alongside iOS 7′s developer debut, the Kids category is aimed at facilitating the process of finding apps and games based on age ratings. The category is curated by Apple editors, who, according to the company, “search the App Store for the best apps in each age group — up to 11 years old”.

Back in August, Apple sent emails to developers asking them to submit apps for the new category.

The Kids section is viewable on the App Store on iOS devices, as well as iTunes on Macs and PCs.

ValSalva
Get them hooked while they are young :D
Rating: 3 Votes

Krazy Bill
Well, there you go then. Explains the new look of iOS and where things are headed. :) Soon our macs will have etch-a-sketch knobs.
Rating: 2 Votes

I dont need this, I need New 'Adults' category on App store


And an inproved "wipe clean" coating on your iDevice :eek:
Rating: 1 Votes


Do you think TV companies should make TV programs/cartoons especially for children, where children are encouraged to pay money to enjoy more of the program "made for them" ?

These games are a cancer and those greedy devs should be held up as examples of how not to offer software. Making such programs directed at children makes it 100x worse.
Rating: 1 Votes

Eduardo1971
This is neat. Make's it more convienient for those of us with children (or even without-I'm not here to judge).
Rating: 1 Votes

Piggie
So no Freemium games going to be allowed in here, and no in app purchase apps either I hope?

Parents need to know they can allow children to download and enjoy any apps from this new area, without needing to worry about their children spending real money in games etc.
Rating: 1 Votes


I know a number of very emotionally mature children and emotionally immature adults. "Kids" uses fewer characters than "children" and is generally acceptable for use as a synonym of "children" in the U.S. Besides, maybe Apple is catering to baby goats too.
Rating: 1 Votes