Apple has filed for a European patent (via Free Patents) detailing a system for combining a fingerprint scanner with near field communication (NFC) technology, allowing for dual modes of operation in a single space-saving design. The patent application was published yesterday and discovered by Patently Apple.

The European patent application is derived from a U.S. patent application filed in March 2012 and quietly published on Thursday without mentioning Apple as the assignee, and the applications describe the fingerprint/NFC circuitry as embedded into a button or other surface included on a mobile device. That implementation lines up with numerous rumors of a fingerprint-scanning home button being included in Apple's upcoming iPhone 5S, although the potential inclusion NFC on the iPhone 5S has not been a frequent topic of rumor discussion. 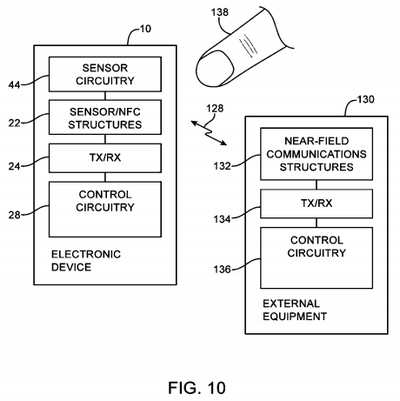 Beyond the home button, Apple suggests that other areas on a mobile device can be used to house the combination sensor, including but not limited to the device’s screen, ear speaker, side bezel, and built-in bottom speaker, as well as other inactive areas on the phone such as next to the home button or near the headphone jack.

Notably, the patent also discusses and depicts a metal ring around the home button and its embedded sensor, something that has been seen on photos of what is alleged to be packaging for the iPhone 5S. Previously, KGI Securities analyst Ming-Chi Kuo indicated that the phone will have a sapphire-covered convex home button to support the fingerprint sensor, but more recent reports have claimed a relatively non-distinct design for the home button that may contain a shinier border as seen in the photos of the packaging.

Apple will unveil the next-generation iPhone 5S and the low-cost iPhone 5C during an iPhone event next Tuesday. In addition to a fingerprint sensor, the iPhone 5S is expected to have an upgraded processor, an improved camera, and a new "champagne" color option.

The fingerprint sensor has me worried.


Electricity, fire, and running water are pretty frightening too.
Score: 27 Votes (Like | Disagree)

Is this new? I mean my wife's atrix did this 3 years ago.


Nope, not one bit new. Except Apple actually knows what they are doing.

Yes it was in the Atrix 3 years ago but was it useful? no, except for maybe that 1 person

the iPhone wasnt the first Smartphone, yet it was something incredibly new and changed the direction phones went in.

Apple does not come out with new technology, they take the technology there and make it useful to the consumers. They dont just throw tech at us and expect us to take the time to figure it out.
Score: 24 Votes (Like | Disagree)

Porco
With the confirmation this week that the NSA work with major hardware manufacturers to purposefully put backdoors, flaws, vulnerabilities etc in anything they can to exploit, just in case they ever feel they need to, I think Apple, like all other major tech companies based in the US and its allied countries (and I would bet most countries try similar things with companies based within their borders too) are going to have an have an increasingly problematic time selling this kind of stuff as being truly secure. Because we all know that if they've hobbled it, they are 'legally' gagged from saying so too.

I've not been a fan of the idea of tying biometrics to Apple products anyway, but whatever your view it's a sad fact that whatever assurances are given over the security of such products don't really mean very much anymore, and this could have a horribly undesirable chilling effect upon innovation and progress.

On a positive note, it could increase the use of truly open source projects, as the only real way to inspire confidence in consumers in the future.
Score: 11 Votes (Like | Disagree)

Imagine if it could read your finger when it was CLOSE to the home button, not even having to touch it. You're phones unlocked before you even look at it.

Also, the time difference between your finger being close (perhaps 1 cm) and actually touching the button would be extremely small. It wouldn't make a difference, and it would be completely unnecessary.
Score: 10 Votes (Like | Disagree)

The fingerprint sensor has me worried.

Our national debt, global warming, and high divorce rate has me much more worried than a fingerprint scanner.
Score: 8 Votes (Like | Disagree)
Read All Comments