A7 Processor to Be 31% Faster and 64-Bit, iPhone 5S to Support Motion Tracking?

The next-generation A7 processor in the iPhone 5S will be roughly 31 percent faster than the current A6, according to a tweet by Fox News' Clayton Morris. His sources have also mentioned a "separate chip devoted to motion tracking".

It's unclear how Apple would use motion tracking abilities, but it could be developing a new control scheme that uses motion gestures like Samsung has built into its Galaxy S series of smartphones. A profile of Jony Ive by Bloomberg earlier this year may support this hypothesis:

Longer term, Ive also has shown interest in altering how people control their computers. He has met with makers of gesture technology that lets people navigate their gadgets by moving their hands -- without touching the screen, said a personal familiar with those interactions. 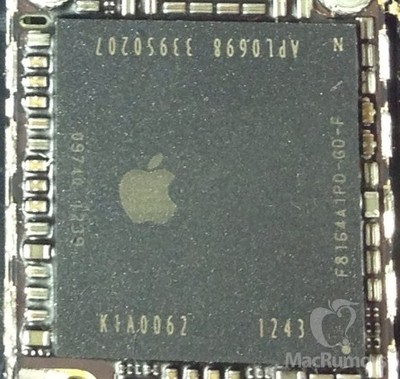 Main A-series chip from prototype iPhone 5S
Separately, 9to5Mac's Mark Gurman writes that Apple has been testing 64-bit prototypes of the A7 chip, potentially for use in the iPhone 5S.

We’ve independently heard claims that some of the iPhone 5S internal prototypes include 64-bit processors.

It’s unclear if 64-bit will make the cut, but it’s been in testing. We’re told that the 64-bit processing will make animations, transparencies, and other iOS 7 graphical effects appear much more smoothly than on existing iOS Devices…

Last September, semiconductor analyst Linley Gwennap claimed that Apple was working on a 64-bit ARMv8 solution for launch in 2014, and Apple may simply be testing future processor architectures in iPhone 5S prototype units. That report claimed the logical upgrade for the A7 would be a quad-core architecture and continued increases in graphics capabilities.

Previous leaks have shown an A7 chip -- pictured above -- with an Apple model number of APL0698, while the original A6 had a model number of APL0598. The A6X found in the fourth-generation iPad carries an APL5598 model number, demonstrating how Apple varies the first digit for members of a given A-series family and increments the second digit when transitioning to a new family.

The iPhone 5S is expected to be unveiled at a media event on September 10.

64-bit seems unlikely since it would require a complete re-write of the iOS kernel, and existing 32-bit applications would need to be run in emulation. Wouldn't we have seen some signs in the developer toolkit if it were 64-bit?


Because iOS is based off of Mac OS X, there would be no need for Windows-type 32-bit emulation. Instead an existing 32-bit application would work seamlessly with the OS and kernel, as 32-bit apps work in the 64-bit only Lion+.
Score: 39 Votes (Like | Disagree)

They should've just done 64bit on iOS from day 1. Obviously this day would come eventually. Intel and AMD had 64 bit processors in 2003-4.


Yes and from day one they should support hyperthreading, and a desktop class gpu, and sse, altivec, mmx, and virtualization and 16gb ram and 1tb ssd
Score: 28 Votes (Like | Disagree)

KPOM
64-bit seems unlikely since it would require a complete re-write of the iOS kernel, and existing 32-bit applications would need to be run in emulation. Wouldn't we have seen some signs in the developer toolkit if it were 64-bit?
Score: 23 Votes (Like | Disagree)

a fingerprint scanner is a gimmick, a larger screen is not.

there are more people that want a larger screen than people who want a fingerprint scanner. this is a fact.

If I can wave my phone over something to spend my money, I sure want some assurance that it knows I'm the one doing it. I don't want people to be able to drain my account just because they sat down next to me at a restaurant or just because my phone happens to be unlocked. It's only a gimmick if you don't understand the big picture.

Also, sometimes, people don't know what they want. Sometimes you have to show them the better way despite their insistence they want something else rather than giving them what they asked for.

I definitely do NOT want a monstrous screen on my phone. That's what my iPad and my 27" monitor are for. My phone is supposed to fit in my pocket.
Score: 21 Votes (Like | Disagree)

runeapple
Jesus... People are complaining about a processor which isn't confirmed for being "only" 30% faster...

Seriously what can't you do on the iPhone 5 now? What are you hoping to do on the 5S which needs more than 30% speed improvements? Want it to replace the Hadron Colider?
Score: 21 Votes (Like | Disagree)

They should've just done 64bit on iOS from day 1. Obviously this day would come eventually. Intel and AMD had 64 bit processors in 2003-4.


That would not have been possible. ARM 64-bit CPU's are only just starting to become a reality. Back in 2007, they weren't even on the ARM roadmap and using an Intell or AMD mobile CPU in an iPhone would have been a disaster.
Score: 18 Votes (Like | Disagree)
Read All Comments

Sunday August 1, 2021 6:21 am PDT by Sami Fathi
Models of the Apple Watch Series 6 with titanium cases part of the "Apple Watch Edition" collection is currently widely unavailable for pick-up in several of Apple's retail stores in the United States and is unavailable entirely for delivery in major markets. Noted by Bloomberg's Mark Gurman in the latest edition of his "Power On" newsletter, titanium models of the Apple Watch Series 6,...
Read Full Article • 135 comments