Along with the new iOS 7 beta 4 and iTunes 11 releases, Apple has also seeded version 5.4 of its Apple TV software to developers. 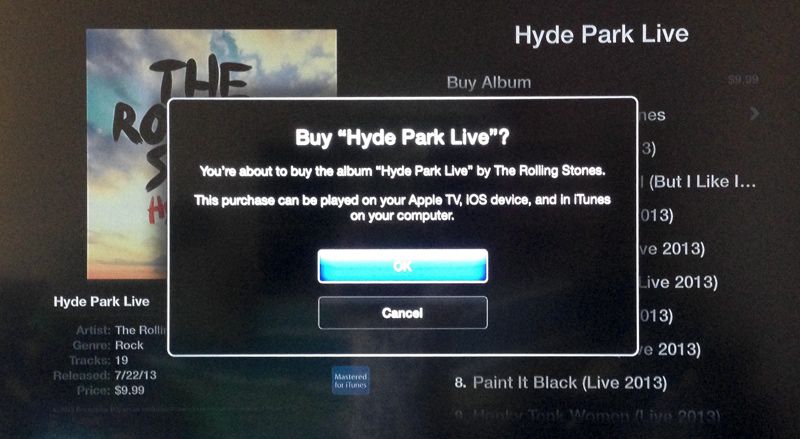 iTunes Music purchases can be made from the Music icon on the home screen of the Apple TV, which offers an iTunes Store-style interface. 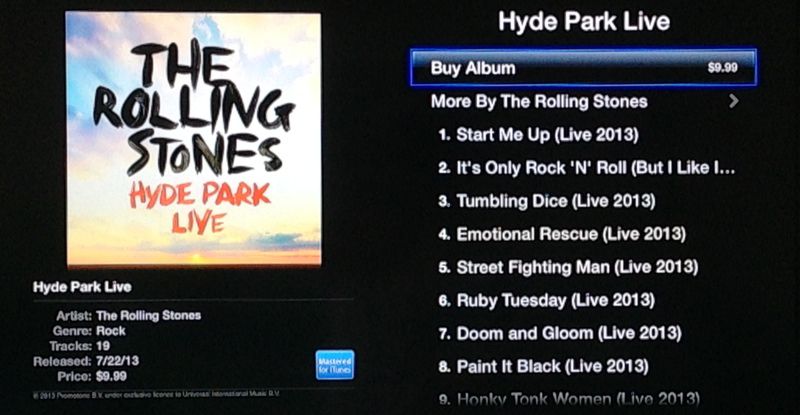 The function is demonstrated in the video below:


Both individual songs and entire albums can be purchased and listened to using the new function on the Apple TV. The feature, along with iTunes Radio and a "Conference Room Mode" designed for business and academic settings, will be available for public use in the fall.

As noted in our post detailing the smaller changes in iOS 7, the Apple TV can also now be set up with an iPhone or an iPad running iOS 7.

The updated Apple TV software is expected to be available alongside iOS 7 later this year.

Meh, I'm Chromecasting almost 15000 songs for $35 though Google Music with all my Android devices and Macs.


That must sound like a jumbled mess!
Rating: 6 Votes

Regbial
All I really want for my Apple TV... is a VLC app. That's all it really needs..
Rating: 5 Votes

Klae17
What I would like to see is "Songs in this show/Movie." You hear a song you like and can hold down the center button (same one to bring up the subtitles) and a list of movie scores come up!
Rating: 2 Votes

iPusch
Apple TV UI design doesn't fit to the cleaner look of iOS 7... Never been a big fan of all the blue and black *eugh* Apple! Now or...in a few years -.-
Rating: 2 Votes

Really? I'm an iOS developer, but I didn't know it was possible to download beta Apple TV software. How do you do this? (not that I'm going to, just interested)


There is an installation guide on the Developer Site that tells you how to install it on your Apple TV.
Rating: 1 Votes

giffut
I am still hoping for the Apple TV App Store - and frankly considering: I have no idea what they are waiting - or fearing - for. This will catapult the Apple TV to the masses Think of it: Games, TV and streaming apps, light
multimedia and browsing, it's endless.

Oh, how I wish for a jailbreak of the Apple TV 3: And using VNC remote access to my Macbook.
Rating: 1 Votes

KattDaDon
What build number is this?
Rating: 1 Votes

It's under the iOS.
Rating: 1 Votes
[ Read All Comments ]